Timpani (sometimes called kettle drums) are drums that are made out of large bowls that are usually made of copper shaped by craftsmen, which after being tuned, have a skin-like material stretched over the top. This material used to be a type of vellum or treated skin, but modern drums use a synthetic material. This top section is known as the "drumhead". Timpani is an Italian word. It is also a plural of the word timpano. However timpano is rarely used in informal English. More often, a timpano is referred to as a drum, a timpani, or simply a timp. Someone who plays a timpani is called a "timpanist".

Timpani are different from other drums because they are tuned to certain musical notes. A timpanist will often describe the drum as being "in voice" (or out of voice, as the case may be) when it is correctly tuned. To play it, it is hit with a special drumstick or "timpani mallet". Other drums that are used in orchestras and bands make a sound rather than a note, and are not tuned. A player normally sits with a group of two, three or four timpani around him, which is why the name timpani is in the plural.

Timpani were originally used in official bands. They can still be seen in the bands of the modern official as in the Household Cavalry of Queen Elizabeth II of the United Kingdom, in which the "kettle drums" (as they are called) are carried by large piebald drumhorses.(See picture below) In the 1700s timpani became popular in orchestral music, and can be heard in the music of Handel, Beethoven and other 19th century composers wrote music that needed the timpani. Nowadays all large orchestras have timpani, and some bands that play popular music use them as well.

Different ways timpani can be made 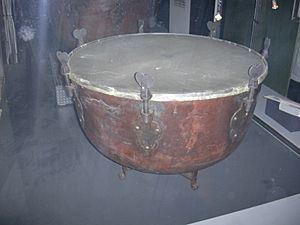 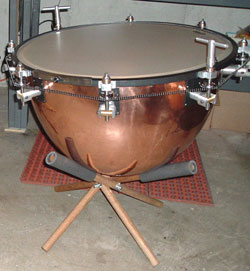 Tuning a timpani by turning every tension rod by itself can be very hard, so some timpani makers invented different ways to change the drum's pitch more quickly.

In a chain timpani, the tension rods are all attached to a chain. This chain is hooked up to a lever, and when a player moves the lever back and forth, it tightens and loosens all the screws at the same time to change the pitch of the drum. 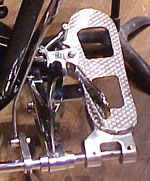 A pedal on a pedal timpani with a ratchet clutch system.

A pedal timpani is a timpani that uses a pedal to change its pitch. It is the kind of timpani that is used the most today. A player can push on the pedal to make the timpani play higher notes, or let the pedal come back up to play lower notes. There are three different kinds of pedal timpani: 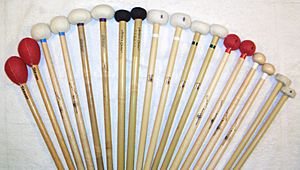 A set of timpani mallets.

In the beginning of the 20th century, some mallets had shafts made out of whale bones and heads made out of sponges.

With a pedal timpani, a player can produce different sound effects using the pedals. Performing glissando on timpani demands switching the pedals. Glissando is generated by pressing the pedal during the vertebra. Furthermore it is possible to play glissando at any volume level up or down. For example, Alexander Rahbari, an outstanding Iranian-Austrian composer used glissando effect produced by switching timpani pedals in the opening of his piece, Persian Mysticism Around G, where the player moves from Bb up to C and then rolling down to G(see the timpani part on right below).

All content from Kiddle encyclopedia articles (including the article images and facts) can be freely used under Attribution-ShareAlike license, unless stated otherwise. Cite this article:
Timpani Facts for Kids. Kiddle Encyclopedia.