Rajasthan ( literally, "Land of Kings") is a state in northern India. The state covers an area of 342,239 square kilometres (132,139 sq mi) or 10.4 percent of the total geographical area of India. It is the largest Indian state by area and the seventh largest by population. Rajasthan is located on the northwestern side of India, where it comprises most of the wide and inhospitable Thar Desert (also known as the "Rajasthan Desert" and "Great Indian Desert") and shares a border with the Pakistani provinces of Punjab to the northwest and Sindh to the west, along the Sutlej-Indus river valley. Elsewhere it is bordered by five other Indian states: Punjab to the north; Haryana and Uttar Pradesh to the northeast; Madhya Pradesh to the southeast; and Gujarat to the southwest.

Major features include the ruins of the Indus Valley Civilisation at Kalibanga and Balathal; the Dilwara Temples, a Jain pilgrimage site at Rajasthan's only hill station, Mount Abu, in the ancient Aravalli mountain range; and, in eastern Rajasthan, the Keoladeo National Park near Bharatpur, a World Heritage Site known for its bird life. Rajasthan is also home to three national tiger reserves, the Ranthambore National Park in Sawai Madhopur, Sariska Tiger Reserve in Alwar and Mukundra Hill Tiger Reserve in Kota.

The state was formed on 30 March 1949 when Rajputana – the name adopted by the British Raj for its dependencies in the region – was merged into the Dominion of India. Its capital and largest city is Jaipur. Other important cities are Jodhpur, Kota, Bikaner, Ajmer, Alwar and Udaipur. The economy of Rajasthan is the ninth-largest state economy in India with

9.24 lakh crore (US$160 billion) in gross domestic product and a per capita GDP of

The geographic features of Rajasthan are the Thar Desert and the Aravalli Range, which runs through the state from southwest to northeast, almost from one end to the other, for more than 850 kilometres (530 mi). Mount Abu lies at the southwestern end of the range, separated from the main ranges by the West Banas River, although a series of broken ridges continues into Haryana in the direction of Delhi where it can be seen as outcrops in the form of the Raisina Hill and the ridges farther north. About three-fifths of Rajasthan lies northwest of the Aravallis, leaving two-fifths on the east and south direction.

The northwestern portion of Rajasthan is generally sandy and dry. Most of this region is covered by the Thar Desert which extends into adjoining portions of Pakistan. The Aravalli Range does not intercept the moisture-giving southwest monsoon winds off the Arabian Sea, as it lies in a direction parallel to that of the coming monsoon winds, leaving the northwestern region in a rain shadow. The Thar Desert is thinly populated; the town of Jodhpur is the largest city in the desert and known as the gateway of the Thar desert. The desert has some major districts like Jodhpur, Jaisalmer, Barmer, Bikaner and Nagour. This area is also important defence point of view. Jodhpur airbase is India's largest airbase and military, BSF bases are also situated here. A single civil airport is also situated in Jodhpur. The Northwestern thorn scrub forests lie in a band around the Thar Desert, between the desert and the Aravallis. This region receives less than 400 mm of rain in an average year. Temperatures can sometimes exceed 54 °C in the summer months or 129 degrees Fahrenheit and drop below freezing in the winter. The Godwar, Marwar, and Shekhawati regions lie in the thorn scrub forest zone, along with the city of Jodhpur. The Luni River and its tributaries are the major river system of Godwar and Marwar regions, draining the western slopes of the Aravallis and emptying southwest into the great Rann of Kutch wetland in neighbouring Gujarat. This river is saline in the lower reaches and remains potable only up to Balotara in Barmer district. The Ghaggar River, which originates in Haryana, is an intermittent stream that disappears into the sands of the Thar Desert in the northern corner of the state and is seen as a remnant of the primitive Sarasvati river.

The Aravalli Range and the lands to the east and southeast of the range are generally more fertile and better watered. This region is home to the Kathiawar-Gir dry deciduous forests ecoregion, with tropical dry broadleaf forests that include teak, Acacia, and other trees. The hilly Vagad region, home to the cities of Dungarpur and Banswara lies in southernmost Rajasthan, on the border with Gujarat and Madhya Pradesh. With the exception of Mount Abu, Vagad is the wettest region in Rajasthan, and the most heavily forested. North of Vagad lies the Mewar region, home to the cities of Udaipur and Chittaurgarh. The Hadoti region lies to the southeast, on the border with Madhya Pradesh. North of Hadoti and Mewar lies the Dhundhar region, home to the state capital of Jaipur. Mewat, the easternmost region of Rajasthan, borders Haryana and Uttar Pradesh. Eastern and southeastern Rajasthan is drained by the Banas and Chambal rivers, tributaries of the Ganges.

The Aravalli Range runs across the state from the southwest peak Guru Shikhar (Mount Abu), which is 1,722 metres (5,650 ft) in height, to Khetri in the northeast. This range divides the state into 60% in the northwest of the range and 40% in the southeast. The northwest tract is sandy and unproductive with little water but improves gradually from desert land in the far west and northwest to comparatively fertile and habitable land towards the east. The area includes the Thar Desert. The south-eastern area, higher in elevation (100 to 350 m above sea level) and more fertile, has a very diversified topography. in the south lies the hilly tract of Mewar. In the southeast, a large area within the districts of Kota and Bundi forms a tableland. To the northeast of these districts is a rugged region (badlands) following the line of the Chambal River. Farther north the country levels out; the flat plains of the northeastern Bharatpur district are part of an alluvial basin. Merta City lies in the geographical centre of Rajasthan. 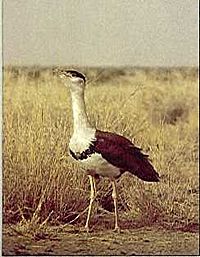 The great Indian bustard has been classed as critically endangered since 2011.

Though a large percentage of the total area is desert with little forest cover, Rajasthan has a rich and varied flora and fauna. The natural vegetation is classed as Northern Desert Thorn Forest (Champion 1936). These occur in small clumps scattered in a more or less open form. The density and size of patches increase from west to east following the increase in rainfall.

The Desert National Park in Jaisalmer is spread over an area of 3,162 square kilometres (1,221 sq mi), is an excellent example of the ecosystem of the Thar Desert and its diverse fauna. Seashells and massive fossilised tree trunks in this park record the geological history of the desert. The region is a haven for migratory and resident birds of the desert. One can see many eagles, harriers, falcons, buzzards, kestrels and vultures. Short-toed snake eagles (Circaetus gallicus), tawny eagles (Aquila rapax), spotted eagles (Aquila clanga), laggar falcons (Falco jugger) and kestrels are the commonest of these.

The Ranthambore National Park located in Sawai Madhopur, one of the well known tiger reserves in the country, became a part of Project Tiger in 1973.

The Dhosi Hill located in the district of Jhunjunu, known as 'Chayvan Rishi's Ashram', where 'Chyawanprash' was formulated for the first time, has unique and rare herbs growing.

The Sariska Tiger Reserve located in Alwar district, 200 kilometres (120 mi) from Delhi and 107 kilometres (66 mi) from Jaipur, covers an area of approximately 800 square kilometres (310 sq mi). The area was declared a national park in 1979.

Tal Chhapar Sanctuary is a very small sanctuary in Sujangarh, Churu District, 210 kilometres (130 mi) from Jaipur in the Shekhawati region. This sanctuary is home to a large population of blackbuck. Desert foxes and the caracal, an apex predator, also known as the desert lynx, can also be spotted, along with birds such as the partridge, harriers, Eastern Imperial Eagle, Pale Harrier, Marsh Harrier, Short-toed Eagle, Tawny Eagle, Sparrow Hawk, Crested Lark, Demoiselle Crane, Skylarks, Green Bee-eater, Brown Dove, Black Ibis and sand grouse. The Great Indian bustard, known locally as the godavan, and which is a state bird, has been classed as critically endangered since 2011. 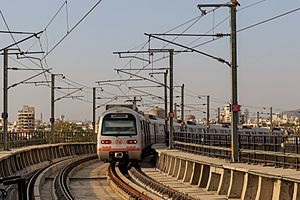 The Jaipur Metro is an important urban transportation link.

Rajasthan's economy is primarily agricultural and pastoral. Wheat and barley are cultivated over large areas, as are pulses, sugarcane, and oilseeds. Cotton and tobacco are the state's cash crops. Rajasthan is among the largest producers of edible oils in India and the second largest producer of oilseeds. Rajasthan is also the biggest wool-producing state in India and the main opium producer and consumer. There are mainly two crop seasons. The water for irrigation comes from wells and tanks. The Indira Gandhi Canal irrigates northwestern Rajasthan.

The main industries are mineral based, agriculture-based, and textile based. Rajasthan is the second largest producer of polyester fibre in India. Several prominent chemical and engineering companies are located in the city of Kota, in southern Rajasthan. Rajasthan is pre-eminent in quarrying and mining in India. The Taj Mahal was built from the white marble which was mined from a town called Makrana. The state is the second largest source of cement in India. It has rich salt deposits at Sambhar, copper mines at Khetri, Jhunjhunu, and zinc mines at Dariba, Zawar mines and Rampura Agucha (opencast) near Bhilwara. Dimensional stone mining is also undertaken in Rajasthan. Jodhpur sandstone is mostly used in monuments, important buildings, and residential buildings. This stone is termed as "chittar patthar". Jodhpur leads in Handicraft and Guar Gum industry. Rajasthan is also a part of the Mumbai-Delhi Industrial corridor is set to benefit economically. The State gets 39% of the DMIC, with major districts of Jaipur, Alwar, Kota and Bhilwara benefiting.

All content from Kiddle encyclopedia articles (including the article images and facts) can be freely used under Attribution-ShareAlike license, unless stated otherwise. Cite this article:
Rajasthan Facts for Kids. Kiddle Encyclopedia.