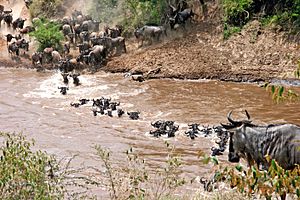 Migration is when animals move on a regular cycle. For example, caribou in the Arctic go south in winter and return in summer when it is warmer. Many birds migrate, such as geese and storks.

Migration is the travelling of long distances in search of a new habitat. The trigger for the migration may be local climate, local availability of food, or the season of the year. To be counted as a true migration, and not just a local dispersal, the movement should be an annual or seasonal event.

Many birds fly to warmer places for the winter, as do some insects such as the migratory locust. Young Atlantic salmon leave the river of their birth when they have reached a few inches (cm) in size.

Many species in the sea have a daily migration. Plankton go up for the day where there is light, and down at night, where they are less easy to find. The many species which feed on them follow them up and down.

Migration is an evolutionary force. This is because it is a major source of natural selection. The success of migratory animals to make the journey is usually needed for them to reproduce.

Many parts of the world have a strongly seasonal climate. In order to survive, many species need to breed in one place and, later, eat in another place. The simplest example is the African herbivores, who follow the growth of grass in East Africa. This region has seasonal rainfall, and so it has seasonal growth of grass. Their predators follow them. 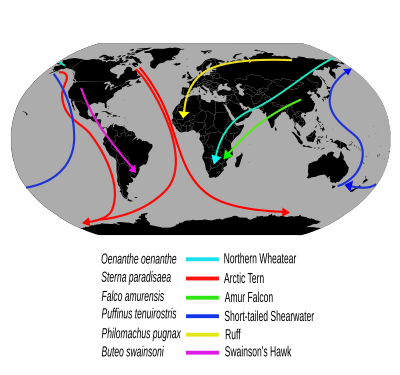 Bird migration is the regular seasonal movement, usually north and south along a 'flyway', between breeding and wintering grounds. Many species of bird migrate. Many birds die when they are migrating, and is mainly to get food. It occurs mostly in the northern hemisphere, where birds are funnelled on to specific routes by natural barriers such as the Mediterranean Sea or the Caribbean Sea.

The Arctic tern holds the long-distance migration record for birds. It flies between Arctic breeding grounds and the Antarctic each year. Albatrosses circle the earth, flying over the southern oceans. The Manx shearwater migrates 14,000 km (8,700 mi) between its northern breeding grounds and the southern ocean. Shorter migrations are common, including altitudinal migrations up and down mountains like the Andes and Himalayas.

All content from Kiddle encyclopedia articles (including the article images and facts) can be freely used under Attribution-ShareAlike license, unless stated otherwise. Cite this article:
Migration Facts for Kids. Kiddle Encyclopedia.