The migration period, or barbarian invasions or Völkerwanderung, is a name for the period of roughly AD 300–700 in Europe. That was the period at the end of Ancient history and the beginning of the Middle Ages. 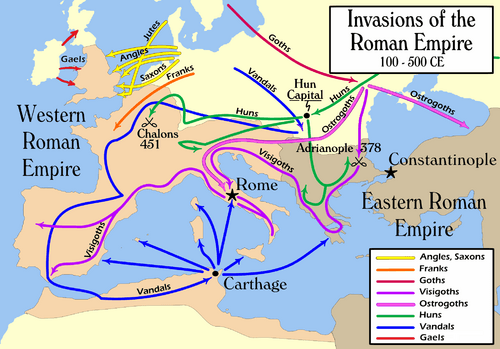 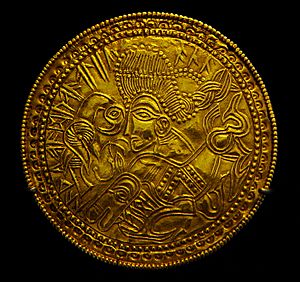 A Migration Period Germanic gold bracteate featuring a depiction of a bird, horse, and stylized head wearing a Suebian knot sometimes theorized to represent Germanic god Wōden and what would later become Sleipnir and Hugin or Munin in Germanic mythology, later attested to in the form of Norse mythology. The runic inscription includes the religious term alu.

The migration included the Goths, Vandals, and Franks, among other Germanic, Bulgar and Slavic tribes. The migration may have been influenced by attacks of the Huns in the east and connected to the Turkic migration in Central Asia, population pressures, or climate changes. The migration period also included groups of Angles, Saxons, Frisians and some Jutes to Britain.

All content from Kiddle encyclopedia articles (including the article images and facts) can be freely used under Attribution-ShareAlike license, unless stated otherwise. Cite this article:
Migration period Facts for Kids. Kiddle Encyclopedia.