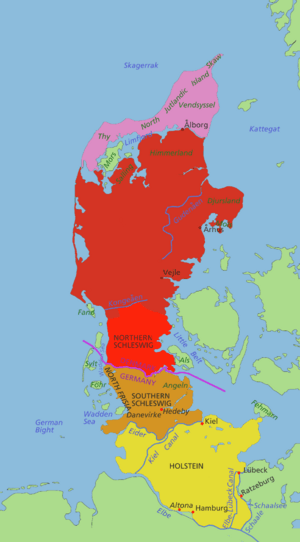 The Jutes were a Germanic people who are believed to have come from Jutland (called Iutum in Latin) in modern Denmark inclusive Southern Schleswig in Northern Germany and part of the Frisian coast. The Jutes, along with the Angles, Saxons and Frisians, were mentioned amongst the Germanic tribes who sailed across the North Sea to raid and eventually invade Great Britain.

It is believed that the Jutes settled particularly in Kent and the Isle of Wight. The land where the Jutes, Angles, and Saxons settled became the country of England.

All content from Kiddle encyclopedia articles (including the article images and facts) can be freely used under Attribution-ShareAlike license, unless stated otherwise. Cite this article:
Jutes Facts for Kids. Kiddle Encyclopedia.