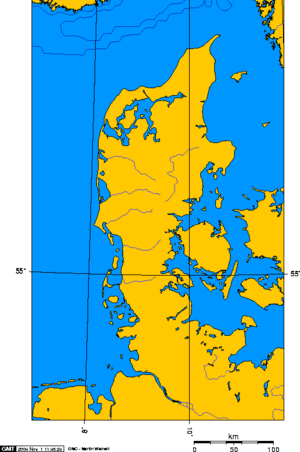 Jutland (Danish: Jylland; German: Jütland) is a peninsula in northern Europe. It forms the mainland part of Denmark and a northern part of Germany. It separates the North Sea from the Baltic Sea. Its terrain is relatively flat, with low hills and peat bogs. It has an area of 29,775 km² (11,496 square miles), and a population of 2,491,852 (2004).

The northernmost part of Jutland became an island following a flood in 1825; the Limfjord now separates it from the mainland. This island is called Vendsyssel-Thy or Nørrejyske Ø ("North Jutlandic Island") and is still commonly reckoned as part of the peninsula; it is also partly coterminous with the county and future region called North Jutland.

The southern third is made up of the German Bundesland of Schleswig-Holstein, with the duchies of Schleswig (also Sønderjylland/Southern Jutland) and Holstein. Both duchies have passed back and forth between the Danes and various German rulers. In the last border movement, Denmark regained North Schleswig (Nordslesvig in Danish) by plebiscite in 1920. Southern Schleswig remained German.

The River Elbe forms the southern border of Jutland with the city of Hamburg on its shore. The Danish Wadden Sea Islands and the North Frisian Islands stretch along the southwest coast of Jutland in the German Bight.

There are two bridges which link the central part ofJutland to the island of Funen to the east. They are the Little Belt Bridge and the New Little Belt Bridge. The roads which use these bridges are part of the European road network.

The largest cities on the Jutland Peninsula are:

All content from Kiddle encyclopedia articles (including the article images and facts) can be freely used under Attribution-ShareAlike license, unless stated otherwise. Cite this article:
Jutland Facts for Kids. Kiddle Encyclopedia.