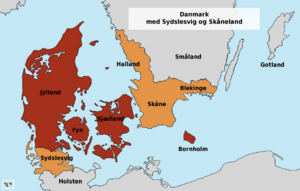 Danish people or Danes are the nation and ethnic group that is born in Denmark, and who speak Danish.

The first mention of Danes within the Danish territory is on the Jelling Rune Stone which mentions how Harald Bluetooth converted the Danes to Christianity in the 10th century. Denmark has been continuously inhabited since this period and although much cultural and ethnic influence and immigration from all over the world has entered Denmark since then, Danes tend to see themselves as ethnic descendents of the early Danes mentioned in the sources.

According to the Danish statistics institute, approximately five million people of Danish origin live in Denmark today. In this context "Danish origin" is defined as being born to parents who are Danish citizens, and the number is arrived at by subtracting from the total population (5,564,249) those who are born abroad to non-citizens who are themselves born abroad (called immigrants), and those who are born in Denmark to parents who are either immigrants or who have foreign citizenship.

All content from Kiddle encyclopedia articles (including the article images and facts) can be freely used under Attribution-ShareAlike license, unless stated otherwise. Cite this article:
Danish people Facts for Kids. Kiddle Encyclopedia.