Iceland (Icelandic: Ísland) is an island country in the North Atlantic, between Greenland and Norway, formerly a possession of Denmark. It is culturally considered to be part of Europe. Iceland is 300 kilometres east of Greenland and 1000 kilometres west of Norway. There are about 329,100 people who live in Iceland. Iceland has an area of 103,000 km².

The first people who lived on Iceland are thought to have been Irish monks. They came to Iceland around the year 800.

In the 9th century, Norsemen went to live in Iceland. The first Norseman who lived in Iceland was Flóki Vilgerðarson. He was also the one who gave Iceland its name.

Ingólfur Arnarsons was the first permanent settler on the island. This a chieftain from Norway went to live in South West Iceland. He founded the city of Reykjavík.

In 930, the Icelandic rulers wrote a constitution. They created the Althing, a kind of parliament in a place called Þingvellir. Therefore, Iceland is the oldest existing republic.

In 985, Erik the Red was sent away from the island because he had killed someone. He sailed to the west and discovered Greenland. Eric's son Leif Ericson discovered America in the year 1000. He called it Vinland. The voyages of Eric, Leif and others were written down in the sagas (long stories). 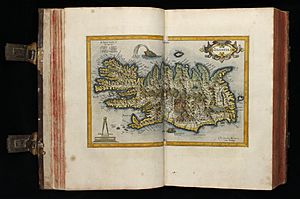 A map of Iceland published in the early 17th century

When Germany took over Denmark on April 9 1940, the Althing decided that Icelanders should rule the country themselves, but they did not declare independence yet. British and later American soldiers occupied Iceland to prevent it from being attacked by the Germans. In 1944, Iceland finally became fully independent.

After World War II, Iceland became a member of the North Atlantic Treaty Organisation (NATO), but not of the European Union. Between 1958 and 1976, there were three debates between Iceland and the United Kingdom about the rights to catch codfish. They were called the Cod Wars.

Iceland is divided into 8 regions, 6 constituencies and 74 municipalities (since 2013). The regions are mainly used for statistics. The constituencies are used for selecting politicians who will represent them in parliament. Lastly, the municipalities give services to the people that live there. These services include education, waste management, public transportation, and so on.

Before 2003, the constituencies were the same as regions, but this was changed because it meant that a vote in Reykjavik meant less than one in a rural area. Even though this was addressed, the problem still exists. 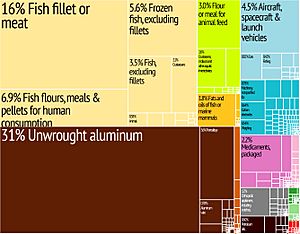 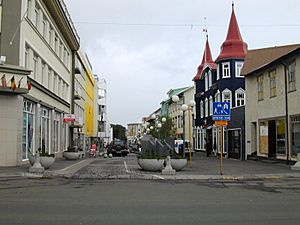 Akureyri is the largest town in Iceland outside the Capital Region. Most rural towns are based on the fishing industry, which provides 40% of Iceland's exports

Fishing and fish processing is the main economic activity in Iceland. Despite effort to diversify, particularly into the travel industry, seafood exports continue to account for nearly three-quarters of merchandise exports and approximately half of all foreign exchange earnings.

Geothermal Energy produces the vast majority of Electrical Power consumed on Iceland, due chiefly to the island's position atop the Mid-Atlantic Ridge and exhibits plentiful hot water reservoirs and geysers. This has the effect of drastically reducing the price of electricity in Iceland, and has attracted several energy-intensive industries.

Aluminum Smelting (The reduction of Aluminum ores to Aluminum metal) is the largest energy-intensive manufacturing sector in Iceland, and the country produced over 800,000 Metric Tonnes per Year in 2013, making it the 10th largest producer of Aluminum metal worldwide.

Three types of landscapes in Iceland.

Iceland is very geologically active and combined with large amounts of rain and snow caused by the warm waters of the gulf stream current which flow toward it, many interesting and unusual geographic features have developed which make it different from any other island so close to the Arctic Circle.

Some of these features are Iceland's numerous mountains, volcanoes, hot springs, rivers, small lakes, waterfalls, glaciers, and geysers. The word geyser is, in fact, derived from Geysir, the name of a particularly famous geyser on the southern side of the island. Glaciers cover approximately 11% of the island and the largest, Vatnajökull, is up to 1 km thick and, by far, the largest glacier in Europe.

Iceland, though considered to be a European country, sits partly in North America since it straddles the Mid-Atlantic Ridge which marks the boundary between the Eurasian and North American tectonic plates. The ridge runs directly through the populated Reykjavik and Thingvellir historic areas, and the tectonic activity of these plates separating is the source of the abundant geothermal energy in the region. 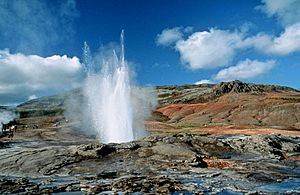 The erupting Geysir in Haukadalur valley, the oldest known geyser in the world 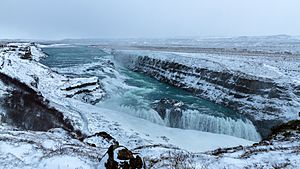 Gullfoss, an iconic waterfall of Iceland

Iceland is highly geologically active with many volcanoes including Hekla, Eldgjá, Herðubreið, and Eldfell. The volcanic eruption of Laki in 1783–1784 caused a famine that killed nearly a quarter of the island's population. In addition, the eruption caused dust clouds and haze to appear over most of Europe and parts of Asia and Africa for several months afterward, and affected climates in other areas.

Iceland has many geysers, including Geysir, from which the English word is derived, and the famous Strokkur, which erupts every 8–10 minutes. After a phase of inactivity, Geysir started erupting again after a series of earthquakes in 2000. Geysir has since grown quieter and does not erupt often.

With the widespread availability of geothermal power, and the harnessing of many rivers and waterfalls for hydroelectricity, most residents have access to inexpensive hot water, heating, and electricity.

On 21 March 2010, a volcano in Eyjafjallajökull in the south of Iceland erupted for the first time since 1821, forcing 600 people to flee their homes. Additional eruptions on 14 April forced hundreds of people to abandon their homes. The resultant cloud of volcanic ash brought major disruption to air travel across Europe.

High-field overview of area around Reykir

Another large eruption occurred on 21 May 2011. This time it was the Grímsvötn volcano, located under the thick ice of Europe's largest glacier, Vatnajökull. Grímsvötn is one of Iceland's most active volcanoes, and this eruption was much more powerful than the 2010 Eyjafjallajökull activity, with ash and lava hurled 20 km (12 mi) into the atmosphere, creating a large cloud. 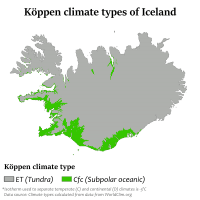 Eyjafjallajökull glacier, one of the smaller glaciers of Iceland

The climate of Iceland's coast is subarctic. The warm North Atlantic Current ensures generally higher annual temperatures than in most places of similar latitude in the world. Regions in the world with similar climates include the Aleutian Islands, the Alaska Peninsula, and Tierra del Fuego, although these regions are closer to the equator. Despite its proximity to the Arctic, the island's coasts remain ice-free through the winter. Ice incursions are rare, the last having occurred on the north coast in 1969.

The climate varies between different parts of the island. Generally speaking, the south coast is warmer, wetter, and windier than the north. The Central Highlands are the coldest part of the country. Low-lying inland areas in the north are the most arid. Snowfall in winter is more common in the north than the south.

Around three-quarters of the island is barren of vegetation; plant life consists mainly of grassland, which is regularly grazed by livestock.

When the island was first settled, it was extensively forested, with around 30% of the land covered in trees. Permanent human settlement greatly disturbed the isolated ecosystem of thin, volcanic soils and limited species diversity. The forests were heavily exploited over the centuries for firewood and timber. Deforestation, climatic deterioration during the Little Ice Age, and overgrazing by sheep imported by settlers caused a loss of critical topsoil due to erosion.

Today, many farms have been abandoned. Three-quarters of Iceland's 100,000 square kilometres is affected by soil erosion, 18,000 km2 (6,900 sq mi) serious enough to make the land useless. Only a few small birch stands now exist in isolated reserves. The planting of new forests has increased the number of trees, but the result does not compare to the original forests. Some of the planted forests include introduced species. 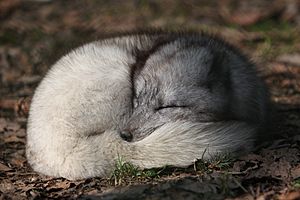 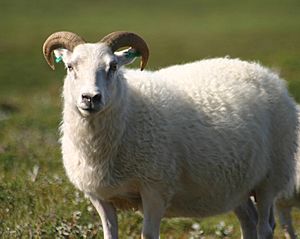 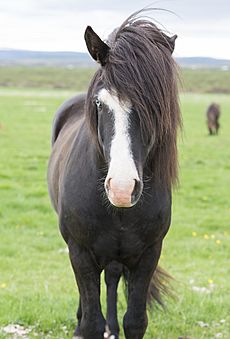 The only native land mammal when humans arrived was the Arctic fox, which came to the island at the end of the ice age, walking over the frozen sea. On rare occasions, bats have been carried to the island with the winds, but they are not able to breed there. Polar bears occasionally come over from Greenland, but they are just visitors, and no Icelandic populations exist. No native or free-living reptiles or amphibians are on the island.

The animals of Iceland include the Icelandic sheep, cattle, chickens, goats, the sturdy Icelandic horse, and the Icelandic Sheepdog, all descendants of animals imported by Europeans. Wild mammals include the Arctic fox, mink, mice, rats, rabbits, and reindeer. Polar bears occasionally visit the island, travelling on icebergs from Greenland. In June 2008, two polar bears arrived in the same month. Marine mammals include the grey seal (Halichoerus grypus) and harbor seal (Phoca vitulina).

Many species of fish live in the ocean waters surrounding Iceland, and the fishing industry is a major part of Iceland's economy, accounting for roughly half of the country's total exports. Birds, especially seabirds, are an important part of Iceland's animal life. Atlantic puffins, skuas, and black-legged kittiwakes nest on its sea cliffs.

Commercial whaling is practised intermittently along with scientific whale hunts. Whale watching has become an important part of Iceland's economy since 1997.

Around 1,300 species of insects are known in Iceland. This is low compared with other countries (over one million species have been described worldwide). Iceland is essentially free of mosquitoes.

Reykjavík is the capital city of Iceland. Reykjavík is also the most important port in Iceland. Other important towns in Iceland are Akureyri, Kópavogur, Hafnarfjörður, Keflavík, Seyðisfjörður and Vestmannaeyjar. 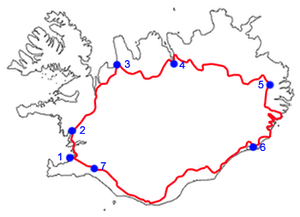 Iceland has a high level of car ownership as it is the main form of transport.

Iceland has no passenger railways.

Icelandic people are considered to be the happiest people on Earth. Iceland has the highest birth rate in Europe and the highest percentage of women working outside their home.

English and Danish are compulsory subjects in the school curriculum. English is widely understood and spoken, while basic to moderate knowledge of Danish is common mainly among the older generations. Polish is mostly spoken by the local Polish community (the largest minority of Iceland), and Danish is mostly spoken in a way largely comprehensible to Swedes and Norwegians—it is often referred to as skandinavíska (i. e. Scandinavian) in Iceland.

There are no real surnames in Iceland. Children get the first name of their father (sometimes mother) with -s+son if it's a boy, and -s+dóttir if it's a girl.

For example, a man named Jón Stefánsson has a son named Fjalar. Fjalar's last name will not be Stefánsson like his father's, it will become Fjalar Jónsson.

The same goes for women. Jón Stefánsson's daughter Kata would not have the last name Stefánsson, she would have the name Jónsdóttir.

All content from Kiddle encyclopedia articles (including the article images and facts) can be freely used under Attribution-ShareAlike license, unless stated otherwise. Cite this article:
Iceland Facts for Kids. Kiddle Encyclopedia.