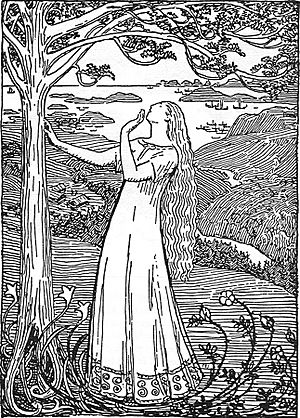 Sagas are stories mostly about ancient Nordic and Germanic life. Some are entirely invented, and some have an historical basis.

They tell about early Viking voyages, the battles that took place during the voyages, about migration to Iceland and of feuds between Icelandic families. They were written in the Old Norse language, mainly in Iceland.

The texts are tales in prose which share some similarities with the epic, often with stanzas or whole poems in alliterative verse embedded in the text, of heroic deeds of days long gone, "tales of worthy men," who were often Vikings, sometimes pagan, sometimes Christian. They are sometimes romanticised and fantastic, but always dealing with human beings one can understand.

The best sagas are recognised as fine literature. Njál's Saga, or the Saga of Burnt Njál, is one of the most famous.

In Old English (Anglo-Saxon), Beowulf is a saga written in England, and so is the later Gawain and the Green Knight, written in a West Midlands dialect. These are both works of the imagination, but Layamon's Brut (about 1200 AD) is based on English history since the Anglo-Saxon Chronicle.

All content from Kiddle encyclopedia articles (including the article images and facts) can be freely used under Attribution-ShareAlike license, unless stated otherwise. Cite this article:
Saga Facts for Kids. Kiddle Encyclopedia.