Old Norse is a Germanic language that was spoken in Scandinavia, during the Viking Age, until about 1300. It was also spoken in Iceland, the Faeroe Islands, Orkney Islands and other places that Scandinavians started settlements (similar to colonies). 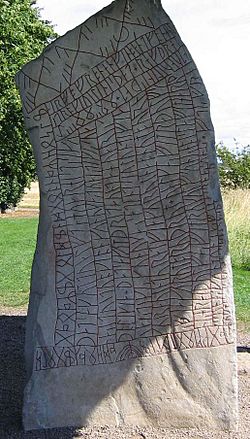 The Rök Runestone in Östergötland, Sweden, is the longest surviving source of early Old East Norse. It is inscribed on both sides

All content from Kiddle encyclopedia articles (including the article images and facts) can be freely used under Attribution-ShareAlike license, unless stated otherwise. Cite this article:
Old Norse language Facts for Kids. Kiddle Encyclopedia.