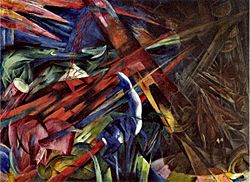 Franz Marc, The fate of the animals, 1913, oil on canvas. Shown in the exhibition of Degenerate art (Entartete Kunst) in Munich, Nazi Germany, 1937 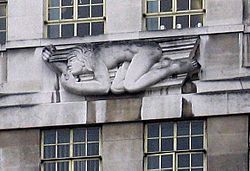 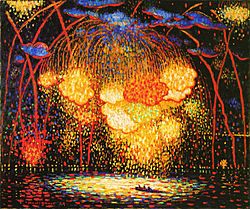 Modernism was a cultural movement of the late 19th century to the mid-20th century. It changed art, literature, music, architecture and drama.

Modernism rejected tradition. It was interested in new ways of doing old things. Also, there was a belief that science and technology could change the world for the better. The details differ greatly, and the term covers some movements which are somewhat contradictory.

Modern art replaced classical art. It included abstract art, cubism, pop art, minimalism, and Dadaism. It affected sculpture quite strongly, though at the beginning sculptors like Rodin and Epstein made both traditional and modernist works. Henry Moore is one of the most famous modernist sculptors.

Composers such as Stravinsky, George Antheil and Schoenberg are modernists. Stravinsky's The Rite of Spring (Le Sacre du Printemps) is a landmark work.

Ballets such as The Rite of Spring and Les Noces (The Wedding) mark the arrival of modernism into this traditional dance form. Modern dance outside of ballet started with Isadora Duncan, Loie Fuller and Ruth St. Denis.

James Joyce's Ulysses is the classic example of modernism in the novel. Ulysses (1922) has been called "a demonstration and summation of the entire Modernist movement". Franz Kafka's The Metamorphosis (1915), The Trial (1925) and T.S. Eliot's poem The Waste Land (1922) are also prime examples. Looking back, it is clear that: Fyodor Dostoyevsky's Crime and Punishment (1866) had a great influence on other writers.

The arrival of magic realism is part of modernism. The novels and short stories of Mikhail Bulgakov such as Diabolidad and The Master and Margarita are examples. 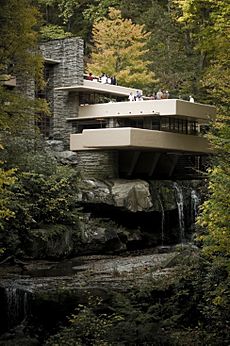 Modernism in architecture is found in the work of Frank Lloyd Wright, Le Corbusier, Walter Gropius the founder of Bauhaus, and Mies van der Rohe. Le Corbusier's famous remark "A building is a machine for living in" shows how different his thinking was to architects of the 19th century. The skyscraper, such as Mies van der Rohe's Seagram Building in New York (1956–1958), became the archetypal modernist building. 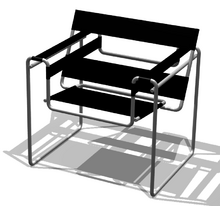 "Wassily" chair by Marcel Breuer is an example of Modernism

A criticism of the modern movement is that it does not value tradition, and goes in for change for the sake of change. What modernists want most is freedom of expression, or, perhaps, freedom of experimentation. This is why many modern paintings avoid making visual copies of real things. In modernist literature, an author may leave out plots or narrative or characterization in books.

These experiments were not random. They drew on the ideas of their day: mass media, science and technology, Marxism, Freudian psychology, and so on. There was a general search for new materials, new methods and new ideas. There was often a rejection of elitism, and a love of populism and popular culture.

Another criticism was of the connection between modernism and socialism. Certainly many modernists were also socialists. In the early days of socialism it seemed to offer hope of a new future without the baggage of the past. This also explains their rejection of tradition.

All content from Kiddle encyclopedia articles (including the article images and facts) can be freely used under Attribution-ShareAlike license, unless stated otherwise. Cite this article:
Modernism Facts for Kids. Kiddle Encyclopedia.