The Rite of Spring facts for kids 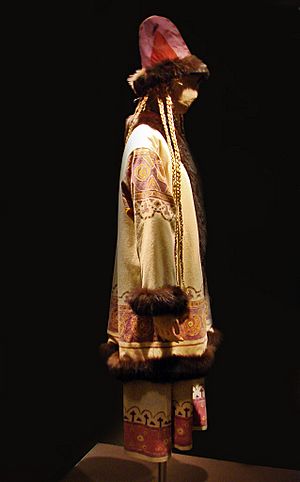 Costume used in the 1991 production of the ballet in Paris, based on Nicolas Roerich's design.

The Rite of Spring (Le Sacre du Printemps) is a ballet in two parts. The entire ballet was a concept developed by Igor Stravinsky. He wrote the music. The set and costumes were designed by Nicholas Roerich. The dances, which Stravinsky hated, were choreographed by Vaslav Nijinsky. Stravinsky complained that Nijinsky had no understanding of the rudiments of music.

The ballet was first performed by Diaghilev's Ballets Russes at the Theatre du Champs-Élysées in Paris on 29 May 1913. The dress rehearsal met with approval from critics and invited guests, but the premiere was greeted with tumult and riot only stilled by the performance of Marie Piltz as the sacrificial maiden. Subsequent performances were received with growing appreciation, but the ballet's great difficulties forced it to be presented only six times.

The ballet was revived in 1920 by the Ballets Russes, but the music had been performed in its entirety in concert before the revival. Nijinsky's dances had been forgotten so Leonide Massine (who had not seen the original performances) designed the dances anew. These met with Stravinsky's approval. In 1940, Walt Disney used the music to accompany a segment of the animated movie Fantasia. This segment depicted lumbering dinosaurs and smoldering volcanoes.

The music lasts about 40 minutes, and is divided into two parts. It has the subtitle "Pictures from Pagan Russia". Stravinsky had the idea of composing music which was about country people from old times in Russia who danced a fertility rite. This means: a ceremony which is supposed to bring good luck to the next year’s harvest. In this ancient Russian dance, one young girl is chosen to dance and dance until she dies. She is the sacrifice. She is sacrificed to the god of spring.

How Stravinsky wrote the score

The painter Nicholas Roerich talked with Stravinsky about the idea for this ballet in 1910. Stravinsky started writing down musical ideas while he was still working on his ballet The Firebird. Then he worked on Petrushka. In 1912 he was able to concentrate on The Rite of Spring. All these ballets were composed for Sergei Diaghilev's Ballets Russes. They were a very famous group of Russian dancers who worked in Europe, mostly in Paris.

The Rite of Spring was first performed by the Ballets Russes on 29 May 1913 at the Théâtre des Champs-Élysées in Paris. The conductor was Pierre Monteux. The audience were shocked at the primitive kind of dancing and the irregular rhythms and strange orchestral sounds and unusual chords. Nijinsky’s choreography was so different from classical ballet. Nijinsky found it difficult to work with Stravinsky and difficult to work with the music.

"A certain part of the audience was thrilled by what it considered to be a blasphemous attempt to destroy music as an art, and, swept away with wrath, began very soon after the rise of the curtain, to make cat-calls and to offer audible suggestions as to how the performance should proceed. The orchestra played unheard, except occasionally when a slight lull occurred. The young man seated behind me in the box stood up during the course of the ballet to enable himself to see more clearly. The intense excitement under which he was labouring betrayed itself presently when he began to beat rhythmically on top of my head with his fists. My emotion was so great that I did not feel the blows for some time".

Marie Rambert heard someone in the gallery call out: "Un docteur … un dentiste … deux docteurs…". The second performance (June 4) was fortunately less eventful, and, according to Maurice Ravel, the entire work could actually be heard.

The complicated music and violent dance steps caused some to boo. They started to shout and whistle. They argued, and other people who liked it argued back. Then some people started to fight. In the end the police were called. Stravinksy was very upset and ran out of the theatre. The performance was a scandal, but this actually made people curious and soon the ballet became very famous. It was performed six times that season, and there were no more interruptions during the other performances.

The Rite of Spring is divided into two parts, and each part has several sections:

In the Introduction we hear the coming of spring. A bassoon starts all by itself on a very high note. Gradually other instruments join in until it sounds like the swarming of insects and other spring noises.

In The Auguries of Spring – Dances of the Young Girls we hear two chords played together, each chord is in a different key. This chord which is in two keys at once is stamped out by the strings and eight horns. A rocking tune is heard on the cor anglais.

This leads to The Game of Capture in which we hear a piccolo trumpet (a small kind of trumpet).

Round-dances of Spring is a country tune on high and low clarinets followed by a slow dance for strings and woodwind. Then there is a big noise, and then quiet once more.

The Procession of the Sage is the entry of the wise man (the sage). It builds into a big climax.

Adoration of the Earth-The Sage is a short bit of very quiet music, leading to

Dance of the Earth which leads Part One to a wild end.

The Introduction describes the night. Lots of chords in several keys at once leads to a tune in the strings.

Mysterious Circles of the Young Girls. This is where one girl is chosen to die. Six solo violas play the tune, an alto flute is heard. Trumpets and horns with mutes interrupt the circling. Then eleven heavy thumps on the strings and drums lead to…

Glorification of the Chosen One. This is a big, exciting dance with noisy horns and timpani and bass drum.

Evocation of the Ancestors. The elders (the wise old men) arrive to majestic chords on wind and brass

Ritual Action of the Ancestors. We hear quiet, ticking chords and a duet for cor anglais and alto flute. Then trumpets and horns, and finally clarinets.

Sacrificial Dance of the Chosen One. The “Chosen One” dances herself to death. The music is very energetic, with very irregular rhythms and time signatures which keep changing almost every bar. The work ends in a huge climax.

Stravinsky's music has many complex harmonies with dissonant sounds. There are passages with polyrhythms (several rhythms at once) as well as polytonality (music in several keys at once). The time signatures keep changing, and he often uses ostinati (repeated patterns).

The Rite of Spring uses a very large orchestra with some unusual instruments. There are almost 100 people on stage playing the piece. Here is a list of the instruments used:

Nijinsky's choreography was thought almost as shocking as the music. The idea is: a tribe sacrifices a young virgin each year in the Spring to please their gods, and make sure crops grow well. The dancers adopt a pigeon-toed stance (position); their moves are heavy. They move together in groups; their movements are like a ritual. They look like a primitive tribe performing a ritual. The ritual moves towards the sacrifice of the girl. The Rite of Spring is a link between classical ballet and Modern dance.p395

Nijinsky's choreography has not been kept very well, but there have been efforts in recent years to reconstruct his performance, using costumes and set designs that look like the original ones from 1912.

The Rite of Spring became even more popular when Walt Disney used some of the music in his animated movie Fantasia in 1940. It is used in the film to describe early life on planet earth with dinosaurs roaming about.

All content from Kiddle encyclopedia articles (including the article images and facts) can be freely used under Attribution-ShareAlike license, unless stated otherwise. Cite this article:
The Rite of Spring Facts for Kids. Kiddle Encyclopedia.