Russia (Russian: Россия), officially called the Russian Federation (Russian: Российская Федерация) is a country that is in Eastern Europe and in North Asia. It is the largest country in the world by land area. About 146.7 million people live in Russia according to the 2019 census. The capital city of Russia is Moscow, and the official language is Russian.

Russia shares land borders with Norway, Finland, Estonia, Latvia, Lithuania and Poland (both via Kaliningrad Oblast), Belarus, Ukraine, Georgia, Azerbaijan, Kazakhstan, China, Mongolia, and North Korea. It also has borders over water with Japan by the Sea of Okhotsk, and the United States by the Bering Strait.

Russia is a very large and diverse country. From 1922 to 1991, it used to be the main part of the Soviet Union. It was a country based on Communism, but today its government is a federal semi-presidential republic. It has elements of democracy. The President is chosen by direct election, but challenging candidates do not have access to the mass media, and so have almost no chance of winning. Its current President is Vladimir Putin. The President rules the country, and the Russian Parliament plays a secondary role.

Russia has 85 regional parliaments, and the presidents of these areas are very rarely ever displaced in an election. As a typical example, Kirsan Ilyumzhinov was President of the Republic of Kalmykia in the Russian Federation from 1993 to 2010. Such a long tenure is not unusual in Russia, and suggests that the electoral system is heavily biased to keep incumbents in power.

At 17,075,400 square kilometres (6,592,800 sq mi), Russia is the largest country in the world, covering more than one-eighth of the Earth's inhabited land area. Russia is also the world's eighth most populous nation with a population of 146.7 million as of 2021. Russia produces a lot of energy made from oil and natural gas.

According to the Constitution of Russia, the country is an asymmetric federation and semi-presidential republic, wherein the President is the head of state and the Prime Minister is the head of government. The Russian Federation is fundamentally structured as a multi-party representative democracy, with the federal government composed of three branches:

The president is elected by popular vote for a six-year term (eligible for a second term, but not for a third consecutive term). Ministries of the government are composed of the Premier and his deputies, ministers, and selected other individuals; all are appointed by the President on the recommendation of the Prime Minister (whereas the appointment of the latter requires the consent of the State Duma). Leading political parties in Russia include United Russia, the Communist Party, the Liberal Democratic Party, and A Just Russia. In 2019, Russia was ranked as 134th of 167 countries in the Democracy Index, compiled by The Economist Intelligence Unit, while the World Justice Project, as of 2014[update], ranked Russia 80th of 99 countries surveyed in terms of rule of law.

Russia's territorial expansion was achieved largely in the late 16th century under the Cossack Yermak Timofeyevich during the reign of Ivan the Terrible, at a time when competing city-states in the western regions of Russia had banded together to form one country. Yermak mustered an army and pushed eastward where he conquered nearly all the lands once belonging to the Mongols, defeating their ruler, Khan Kuchum.

Russia has a wide natural resource base, including major deposits of timber, petroleum, natural gas, coal, ores and other mineral resources.

Cities in Russia with more than one million people are, in order: 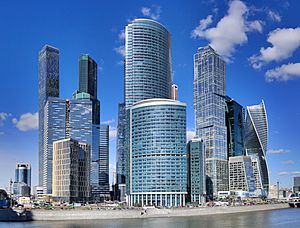 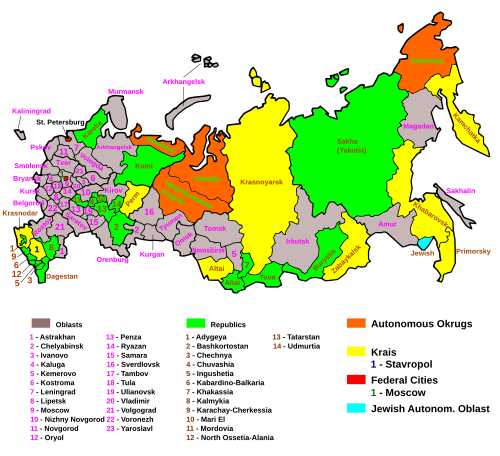 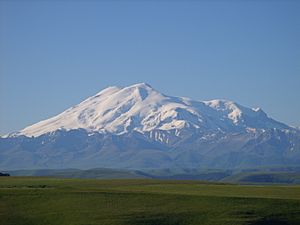 Mount Elbrus, a dormant volcano, is the highest point of the Caucasus and Russia and the tenth most prominent peak in the world 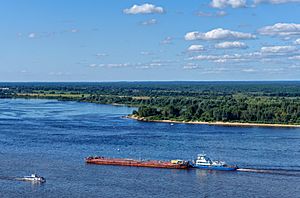 Volga River at Nizhny Novgorod. The Volga is the longest river in Europe 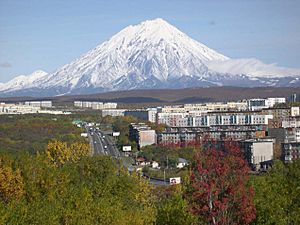 Koryaksky volcano towering over Petropavlovsk-Kamchatsky on the Kamchatka Peninsula

Most of Russia consists of vast stretches of plains that are predominantly steppe to the south and heavily forested to the north, with tundra along the northern coast. Russia possesses 10% of the world's arable land. Mountain ranges are found along the southern borders, such as the Caucasus (containing Mount Elbrus, which at 5,642 m (18,510 ft) is the highest point in both Russia and Europe) and the Altai (containing Mount Belukha, which at the 4,506 m (14,783 ft) is the highest point of Siberia outside of the Russian Far East); and in the eastern parts, such as the Verkhoyansk Range or the volcanoes of Kamchatka Peninsula (containing Klyuchevskaya Sopka, which at the 4,750 m (15,584 ft) is the highest active volcano in Eurasia as well as the highest point of Asian Russia). The Ural Mountains, rich in mineral resources, form a north-south range that divides Europe and Asia.

Russia has an extensive coastline of over 37,000 km (22,991 mi) along the Arctic and Pacific Oceans, as well as along the Baltic Sea, Sea of Azov, Black Sea and Caspian Sea. The Barents Sea, White Sea, Kara Sea, Laptev Sea, East Siberian Sea, Chukchi Sea, Bering Sea, Sea of Okhotsk, and the Sea of Japan are linked to Russia via the Arctic and Pacific. Russia's major islands and archipelagos include Novaya Zemlya, the Franz Josef Land, the Severnaya Zemlya, the New Siberian Islands, Wrangel Island, the Kuril Islands, and Sakhalin. The Diomede Islands (one controlled by Russia, the other by the United States) are just 3 km (1.9 mi) apart, and Kunashir Island is about 20 km (12.4 mi) from Hokkaido, Japan.

Russia has thousands of rivers and inland bodies of water, providing it with one of the world's largest surface water resources. Its lakes contain approximately one-quarter of the world's liquid fresh water. The largest and most prominent of Russia's bodies of fresh water is Lake Baikal, the world's deepest, purest, oldest and most capacious fresh water lake. Baikal alone contains over one-fifth of the world's fresh surface water. Other major lakes include Ladoga and Onega, two of the largest lakes in Europe. Russia is second only to Brazil in volume of the total renewable water resources. Of the country's 100,000 rivers, the Volga is the most famous, not only because it is the longest river in Europe, but also because of its major role in Russian history. The Siberian rivers Ob, Yenisey, Lena and Amur are among the longest rivers in the world.

The enormous size of Russia and the remoteness of many areas from the sea result in the dominance of the humid continental climate, which is prevalent in all parts of the country except for the tundra and the extreme southwest. Mountains in the south obstruct the flow of warm air masses from the Indian Ocean, while the plain of the west and north makes the country open to Arctic and Atlantic influences.

Most of Northern European Russia and Siberia has a subarctic climate, with extremely severe winters in the inner regions of Northeast Siberia (mostly the Sakha Republic, where the Northern Pole of Cold is located with the record low temperature of −71.2 °C or −96.2 °F), and more moderate winters elsewhere. Both the strip of land along the shore of the Arctic Ocean and the Russian Arctic islands have a polar climate.

The coastal part of Krasnodar Krai on the Black Sea, most notably in Sochi, possesses a humid subtropical climate with mild and wet winters. In many regions of East Siberia and the Far East, winter is dry compared to summer; other parts of the country experience more even precipitation across seasons. Winter precipitation in most parts of the country usually falls as snow. The region along the Lower Volga and Caspian Sea coast, as well as some areas of southernmost Siberia, possesses a semi-arid climate. 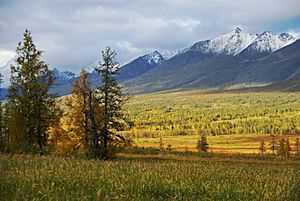 Throughout much of the territory there are only two distinct seasons—winter and summer—as spring and autumn are usually brief periods of change between extremely low and extremely high temperatures. The coldest month is January (February on the coastline); the warmest is usually July. Great ranges of temperature are typical. In winter, temperatures get colder both from south to north and from west to east. Summers can be quite hot, even in Siberia. The continental interiors are the driest areas.

Main pages: List of mammals of Russia and Wildlife of Russia 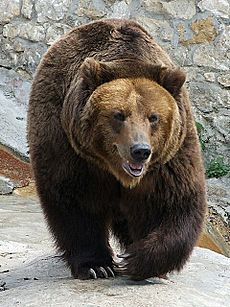 The brown bear is a popular symbol of Russia, particularly in the West.

From north to south the East European Plain, also known as Russian Plain, is clad sequentially in Arctic tundra, coniferous forest (taiga), mixed and broad-leaf forests, grassland (steppe), and semi-desert (fringing the Caspian Sea), as the changes in vegetation reflect the changes in climate. Siberia supports a similar sequence but is largely taiga. Russia has the world's largest forest reserves, known as "the lungs of Europe", second only to the Amazon Rainforest in the amount of carbon dioxide it absorbs.

There are 266 mammal species and 780 bird species in Russia. A total of 415 animal species have been included in the Red Data Book of the Russian Federation as of 1997 and are now protected. There are 28 UNESCO World Heritage Sites in Russia, 40 UNESCO biosphere reserves, 41 national parks and 101 nature reserves. Russia still has many ecosystems which are still untouched by man— mainly in the northern areas taiga and in subarctic tundra of Siberia. Over time Russia has been having improvement and application of environmental legislation, development and implementation of various federal and regional strategies and programmes,and study, inventory and protection of rare and endangered plants, animals, and other organisms, and including them in the Red Data Book of the Russian Federation.

Russia is a multinational state, home to over 193 ethnic groups. In the 2010 Census, roughly 81% of the population were ethnic Russians, while rest of the 19% of the population were minorities; while around 84.93% of the Russia's population was of European descent, of which the vast majority were Slavs, with minorities of Germanic, Baltic-Finns and other peoples. There are 22 republics in Russia, designated to have their own ethnicities, cultures, and languages. In 13 of them, ethnic Russians consist a minority. According to the United Nations, Russia's immigrant population is the third-largest in the world, numbering over 11.6 million; most of which are from post-Soviet states, mainly Ukrainians. Template:Largest cities of Russia 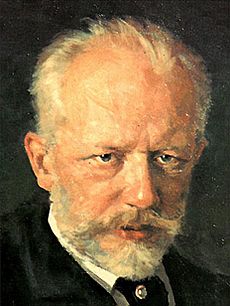 Russian composer Tchaikovsky created famous ballets such as The Nutcracker. The impressario Sergei Diaghilev was responsible for the development of ballet in the early 20th century with the Ballets Russes. Dance companies at the Mariinsky Theatre and the Bolshoi Ballet produced many famous dancers.

Russians have contributed many famous works of literature. Alexander Pushkin is considered a founder of modern Russian literature. He was a poet from the 19th century.

Other famous poets and writers of the 19th century were Anton Chekhov, Mikhail Lermontov, Leo Tolstoy, Nikolai Gogol (he was born in what is now Ukraine, but during his lifetime Ukraine was a part of Russia), Ivan Turgenev and Fyodor Dostoyevsky. Tolstoy and Dostoyevsky are considered by many people to be two of the greatest novelists ever. Three Russians won the Nobel Prize for Literature in the 20th century: Boris Pasternak (1958), Mikhail Sholokhov (1965) and Aleksandr Solzhenitsyn (1980). Mikhail Bulgakov's The Master and Margarita was also a novel of the highest quality.

Soccer, ice hockey and basketball are among the most popular sports. Boxing, gymnastics, weightlifting, and tennis are also popular sports. Track suits are popular clothing items for many Russians. Sports people to gain world fame include former tennis world number one Maria Sharapova, who has won three Grand Slam titles, and was the world's highest paid female athlete in 2008.

Chess is the main intellectual sport in Russia. In the 20th century there were nine Russian World Chess Champions, more than all other nations combined. 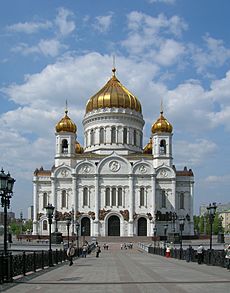 Cathedral of Christ the Saviour, demolished during the Soviet period, was reconstructed from 1990–2000.

All content from Kiddle encyclopedia articles (including the article images and facts) can be freely used under Attribution-ShareAlike license, unless stated otherwise. Cite this article:
Russia Facts for Kids. Kiddle Encyclopedia.