Lake Baikal is a huge lake in Siberia, Russia. It is the biggest fresh water reservoir in the world. The lake is near Irkutsk.

The lake has fish that exist only here and nowhere else. It is home to more than 1,700 species of plants and animals, two-thirds of which can be found nowhere else in the world. 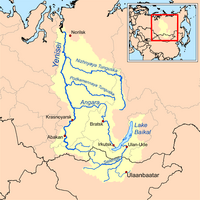 In geological terms, the rift is young and active – it widens about two cm per year. The fault zone is also seismically active; there are hot springs in the area and notable earthquakes every few years.

Baikal's age is 25–30 million years: it is one of the oldest lakes. It is unique among large, high-latitude lakes, because its sediments have not been scoured by overriding continental ice sheets. U.S. and Russian studies of core sediment in the 1990s gave a detailed record of climatic variation over the past 250,000 years. Longer and deeper sediment cores are expected soon. Lake Baikal is the only confined freshwater lake in which evidence of gas hydrates exists.

The lake is completely surrounded by mountains. The Baikal Mountains on the north shore and the taiga are protected as a national park. It has 27 islands; the largest, Olkhon, is 72 km (45 mi) long and is the third-largest lake-bound island in the world. The lake is fed by as many as 330 inflowing rivers. It is drained through a single outlet, the Angara River.

Despite its great depth, the lake's waters are well-mixed and well-oxygenated throughout the water column, compared to the stratification that occurs in such bodies of water as Lake Tanganyika and the Black Sea. 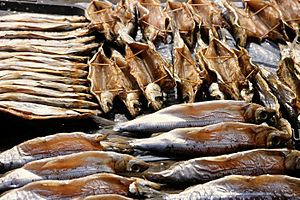 The omul fish (Coregonus autumnalis migratorius) is local to Lake Baikal. It is fished, smoked, and sold on all markets around the lake. For many travellers on the Trans-Siberian railway, purchasing smoked omul is one of the highlights of the long journey.

Bears and deer can be watched and hunted by Baikal coasts.

In 1986, Baikalskyi and Barguzinskyi became Biosphere Reserves. The ecosystems are part of UNESCO's Man and the Biosphere (MAB) Programme.

All content from Kiddle encyclopedia articles (including the article images and facts) can be freely used under Attribution-ShareAlike license, unless stated otherwise. Cite this article:
Lake Baikal Facts for Kids. Kiddle Encyclopedia.