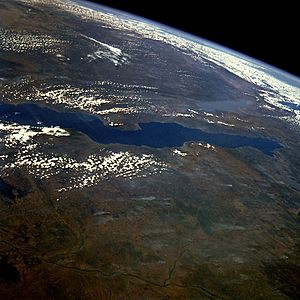 Lake Tanganyika is large lake in the Great Rift Valley of central Africa. The lake is divided between four countries – Burundi, Democratic Republic of the Congo (DRC), Tanzania and Zambia. It is the longest fresh water lake in the world and the second deepest.

All content from Kiddle encyclopedia articles (including the article images and facts) can be freely used under Attribution-ShareAlike license, unless stated otherwise. Cite this article:
Lake Tanganyika Facts for Kids. Kiddle Encyclopedia.