Cichlids are fish from the family Cichlidae in the order Perciformes. Cichlids are members of a suborder known as Labroidei. This family is both large and diverse. At least 1,650 species have been scientifically described, making it one of the largest vertebrate families.

New species are discovered annually, and many species remain undescribed. The actual number of species is therefore unknown, with estimates varying between 2,000 and 3,000. Cichlids are popular freshwater fish kept in the home aquarium.

Cichlids span a wide range of body sizes, from species as small as 2.5 cm (0.98 in) in length to much larger species approaching 1 m (3.3 ft) in length. As a group, cichlids exhibit a similar diversity of body shapes. Generally, however, cichlids tend to be of medium size, ovate in shape, and slightly laterally compressed.

Many cichlids, are important food fishes, while others are valued game fish. The family also includes many familiar aquarium fish, including the angelfish.

Cichlids have the largest number of endangered species among vertebrate families. Their diversity in the African Great Lakes is important for the study of speciation in evolution. Many cichlids introduced into waters outside of their natural range have become nuisances.

The bumblebee cichlid, Pseudotropheus crabro, is specialised in feeding on parasites from the catfish Bagrus meridionalis.

Many cichlids are primarily herbivores, feeding on algae and plants. Small animals, particularly invertebrates, are only a minor part of their diets. This variety of feeding styles has helped cichlids to inhabit similarly varied habitats. Its pharyngeal teeth (teeth in the throat) afford cichlids so many "niche" feeding strategies, because the jaws pick and hold food, while the pharyngeal teeth crush the prey. 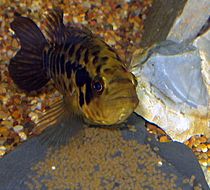 A substrate brooding female managuense cichlid, Parachromis managuense, guards a clutch of eggs in the aquarium.

All species show some form of parental care for both eggs and larvae, often nurturing free-swimming young until they are weeks or months old. The species Neolamprologus pulcher uses a cooperative breeding system, in which one breeding pair has many helpers which are subordinate to the dominant breeders.

In 2010, the International Union for Conservation of Nature classified 184 species as vulnerable, 52 as endangered, and 106 as critically endangered.

Many large cichlids are popular game fish. The peacock bass (Cichla species) of South America is one of the most popular sportfish. It was introduced in many waters around the world. In Florida, this fish generates millions of hours of fishing and sport-fishing revenue of more than US$8 million a year.

Since 1945, cichlids have become increasingly popular as aquarium fish. The most common species in hobbyist aquaria is Pterophyllum scalare from the Amazon River basin in tropical South America, known in the trade as the "angelfish". Another popular or readily available species is the oscar.

All content from Kiddle encyclopedia articles (including the article images and facts) can be freely used under Attribution-ShareAlike license, unless stated otherwise. Cite this article:
Cichlid Facts for Kids. Kiddle Encyclopedia.