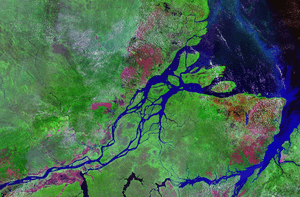 Satellite image of the mouth of the Amazon river

The Amazon River (also named Rio Amazonas in Portuguese and Spanish) is the largest river in the world by the amount or volume of water it carries. It flows through the tropical forests of South America, mainly in Brazil. Its headwaters are in the Andes Mountains in Peru, on the western edge of South America and flows eastward into the Atlantic Ocean near the equator. 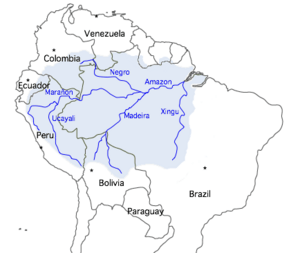 The basin of the Amazon, with the most important rivers. Please note the Tocantins is also part of that basin, even if it is not tributary to the Amazon

It is one of the longest rivers in the world. There have been different studies that have tried to measure its exact length. As the studies have come up with different numbers, it is therefore difficult to give an exact number. The length also changes in the rainy season. Several studies from Brazil, Spain and Chile say it is the longest river in the world, longer than the Nile. The Nile has a length of 6,571 kilometres (4,083 mi). The Amazon may have a length of 6,937 km (4,310 mi). The Spanish daily newspaper El País gives its length at 6,850 km (4,260 mi). In 2007, scientists from Peru and Brazil calculated a length of 6,800 km (4,200 mi).

The source of the Amazon is in the Andes Mountains of western South America. It flows east from there to the Atlantic Ocean. Most of the huge river and its many tributaries are in the country of Brazil. There are many places on the Amazon where a person on one side of the river cannot see the other side. The Brazilians call the Amazon the "River Sea." The Amazon is navigable from the ocean to Peru. Ocean ships can travel on the Amazon all the way across Brazil, and most of South America, to the city of Iquitos in Peru.

One characteristic of the Amazon river is the Brazo Casiquiare, a water connection to the Orinoco river into Venezuela, that connects the two basins. 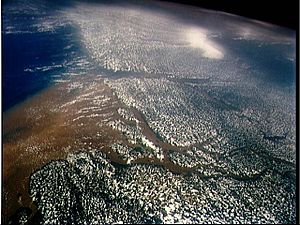 A satellite image of the mouth of the Amazon River, looking south

Along the coastline, near Cabo do Norte, there are many islands partially covered with water. There are also sandbanks. The tides of the Atlantic generate a wave that reaches into the Amazon river. This wave goes along the coast for about 420 kilometres (261 miles). The phenomenon of this wave generated by the tides is called a tidal bore. Locally it is known as pororoca. The pororoca occurs where the water is less than 7 m (23 ft) deep. It starts with a loud noise, and advances at a speed of 15–25 km/h (9–16 mph). The bore is the reason the Amazon does not have a delta. The ocean rapidly carries away the large amount of silt brought by the Amazon. This makes it impossible for a delta to grow past the shoreline. It also has a very large tide, that can reach 6 metres (20 feet). The place has become popular for river surfing.

The Amazon River has many

There are no bridges across the entire width of the river. This is not because the river would be too wide to bridge; for most of its length, engineers could build a bridge across the river easily. For most of its course, the river flows through the Amazon Rainforest, where there are very few roads and cities. Most of the time, the crossing can be done by a ferry, so there is no need to build a bridge. The Manaus Iranduba Bridge linking the cities of Manaus and Iranduba spans the Rio Negro (a tributary of the Amazon).

The river is the main route of traffic in the region. Most cities are on the banks of the river. The biggest city on the river is Manaus, which is also the capital of the Brazilian State of Amazonas. Many native people live in the Amazon, such as the Urarina who live in Peru.

All content from Kiddle encyclopedia articles (including the article images and facts) can be freely used under Attribution-ShareAlike license, unless stated otherwise. Cite this article:
Amazon River Facts for Kids. Kiddle Encyclopedia.