The neon tetra (Paracheirodon innesi) is a freshwater fish. Neon tetras are native to South America and mainly in the Amazon. In captivity they grow to about 2.2 cm. 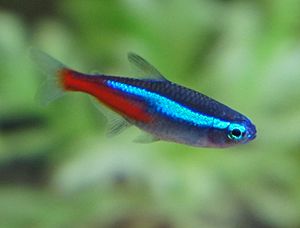 The neon tetra has a light-blue back over a silver-white abdomen. The fish is characterized by an iridescent blue horizontal stripe along each side of the fish from its nose to the base of the adipose fin, and an iridescent red stripe that begins at the middle of the body and extends posteriorly to the base of the caudal fin. Rarely, they develop a dark olive-green sheen lining on their backs. The fish is partially transparent (including fins) except for these markings. During the night, the blue and red become gray or black as the fish rests—it reactivates once it becomes active in the morning. It grows to approximately 3 cm (1.2 in) in overall length. Sexual dimorphism is slight, with the female having a slightly larger belly, and a bent iridescent stripe rather than the male's straight stripe. They have recently become available in a long-fin variety.

Neon tetras are omnivores so will happily eat most flake foods. They should also be fed live food like brine shrimp or daphnia supplement their diets. 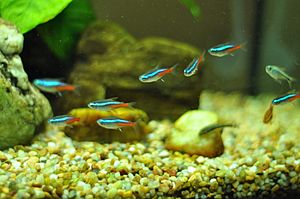 A shoal of neon tetras in a home aquarium

Neon tetras are sturdy, cheap and easy to look after. They are schooling fish and like to be kept with other neon tetras. They can also be kept in community tanks with other peaceful fish. They like to live in a water temperature of around 20–26°C.

All content from Kiddle encyclopedia articles (including the article images and facts) can be freely used under Attribution-ShareAlike license, unless stated otherwise. Cite this article:
Neon tetra Facts for Kids. Kiddle Encyclopedia.