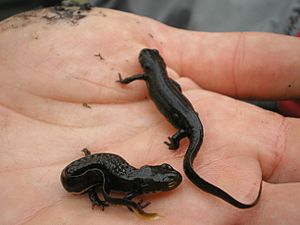 The Latin Caudata and Greek Urodela both mean "tailed" and have been used as a scientific name at the rank of order for the salamanders (as opposed to the tail-less frogs). Thus they are synonyms. 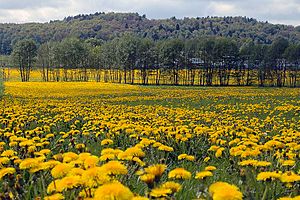 The common dandelion Taraxacum officinale sensu lato is an extremely widespread group of apomictic lineages, and some scientists apply the "biological species concept" to divide it into many distinct species; other scientists regard all the names for those independent species as synonyms.

Synonyms in taxonomy are similar to normal synonyms, there are two (or more than two) names for the same thing in a scientific classification. For example, the cat has a few scientific names in: Felis silvestris catus, Felis catus, and Felis catus domestica.

In botany, the word "synonym" has a special meaning. There is one "correct name", and the other names are synonyms. For example, Daemonorops draco is the correct name of a species of palm trees, and Calamus draco is a synonym for the same species.

In zoology, there is one "valid name" and the others are "junior synonyms".

All content from Kiddle encyclopedia articles (including the article images and facts) can be freely used under Attribution-ShareAlike license, unless stated otherwise. Cite this article:
Synonym (taxonomy) Facts for Kids. Kiddle Encyclopedia.