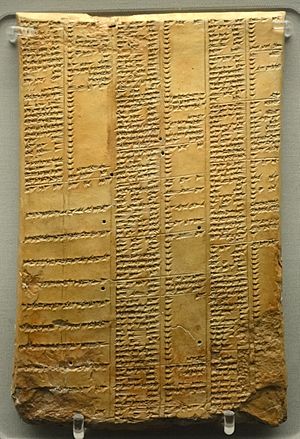 Synonym list in cuneiform on a clay tablet, Neo-Assyrian period

A synonym is a word (or sometimes a phrase) which means the same thing as another word or phrase.

One can find sets of synonyms in a thesaurus, which is a book listing groups of related words.

The word "synonym" dates back over 500 years, to late Middle English. The term is derived from Latin from the Greek word sunōnumon, neuter form (used as a noun) of the adjective sunōnumos, from sun- meaning 'with' + onoma meaning 'name' in the Greek language.

The meaning of the word has remained unchanged for all these centuries. There is even a saying, going back to 1892, "Once a synonym, always a synonym". The word has been taught to generations of English-language students and is commonly known by the general public. Many other languages have a similar word for "synonym" with the same or similar spelling.

All content from Kiddle encyclopedia articles (including the article images and facts) can be freely used under Attribution-ShareAlike license, unless stated otherwise. Cite this article:
Synonym Facts for Kids. Kiddle Encyclopedia.