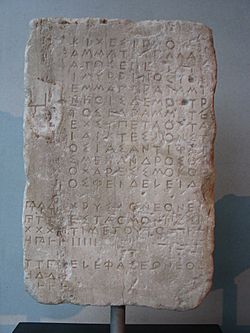 Inscription about the statue of Athena Parthenos in the Parthenon, 440/439 BC

The Greek language had many different dialects, but the “Attic Greek” which was spoken by the people of Athens is thought to be the purest of the forms. Because the Greeks became very powerful in the countries around the Mediterranean Sea their language spread very quickly. Alexander the Great even took it into Asia. Later, in the Roman world, children were taught Greek as a second language in the same way that many non-English speakers today learn English as their second language. This all makes Ancient Greek very important.

All languages change with time, and Greek has changed a lot since 25 centuries ago. Modern Greek is often said to have started in the year 1453 A.D.

Unlike Latin, the Ancient Greek language did not split into many languages, but it is still considered to be a separate language from the Modern Greek language. Pronunciation has changed extensively. For instance, the letter "b" called beta is now pronounced "v" and Greeks now call this letter "vita". The spelling has not changed, which gives the appearance of less change than actually happened. Also, many different vowels and diphthongs all merged into "i", the vowel sound in the English word "meet". The verbal system has radically changed. It is now much simpler. The tonal system of Ancient Greek has disappeared. In spite of this the language, until recently, was spelled as if the old tones were still present. In spite of the extensive changes, it is remarkable how much has survived intact through the centuries.

There is a community near Trabzon in Turkey which speaks a dialect very like that of Ancient Greece.

All content from Kiddle encyclopedia articles (including the article images and facts) can be freely used under Attribution-ShareAlike license, unless stated otherwise. Cite this article:
Ancient Greek language Facts for Kids. Kiddle Encyclopedia.