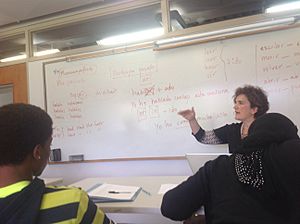 Adults do not learn languages the same way they did when they were young. So if they learn a second language, it is difficult, and they have little chance of speaking it as well as their native language because learning a second language will require a lot of effort.

Some children have more than one native language like when they live in a foreign country or when their father speaks a different language from their mother.

All content from Kiddle encyclopedia articles (including the article images and facts) can be freely used under Attribution-ShareAlike license, unless stated otherwise. Cite this article:
Second language Facts for Kids. Kiddle Encyclopedia.