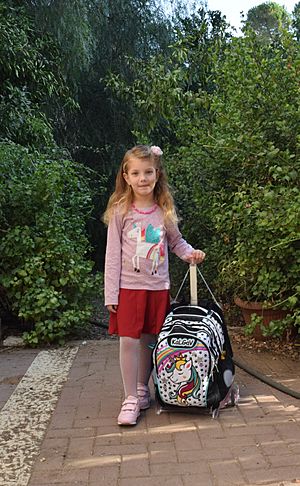 A six-year-old girl at the first entrance to the school (Jerusalem, Israel, 2019). 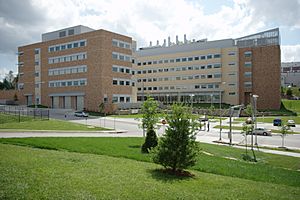 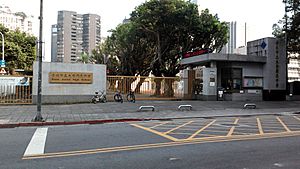 A school is a place where people go to learn about topics such as reading, writing and mathematics. In a school or university, one or more teachers help students to learn.

In many places around the world, children have to go to school for a certain number of years. Learning may take place in the classroom, in outside environments or on visits to other places. Colleges and universities are places to learn for students over 17 or 18. Vocational schools teach skills people need for jobs.

Some people attend school longer than others. This is because some jobs require more training than others. For young children, one teacher is able to teach all subjects. Teachers for older students are often specialized and they only teach a few subjects. Common subjects taught include science, arts such as music, humanities, like geography and history, and languages.

Children with disabilities sometimes go to special schools where they are able to teach things which regular schools do not and have special equipment.

Graduate schools are for students who have graduated from college.

Education for all is quite modern. In England, for example, most people could not read or write, even in the 18th century. We know this because when they got married, those who could not write put an 'X' on the certificate, and someone else wrote their name. Mass education for reading and writing began in the 19th century.

Even when there was education, in most countries boys were taught differently from girls, and separately from girls. Long ago, most schools were run by religious denominations. That is because clerics were once almost the only people who were literate. Today, most countries have schools which accept both boys and girls. Some places still do not have schools for girls.

School as a place to learn for life 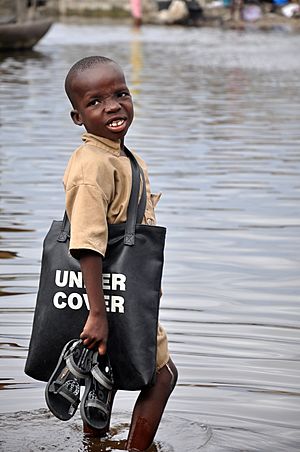 Beninese boy trying to cross the flooded courtyard of his school.

In many parts of the world, schools also help children learn things about life.

Pedagogy is the science of teaching children. Different schools use different ways of teaching. There is quite a lot of disagreement about what and how students should be taught. Many countries solve this by allowing different types of school, so parents and children have some choice. Choices may include home education.

Components of most schools

A school entrance building in Australia

Schools are organized spaces purposed for teaching and learning. The classrooms, where teachers teach and students learn, are of central importance. Classrooms may be specialized for certain subjects, such as laboratory classrooms for science education and workshops for industrial arts education.

Typical schools have many other rooms and areas, which may include:

All content from Kiddle encyclopedia articles (including the article images and facts) can be freely used under Attribution-ShareAlike license, unless stated otherwise. Cite this article:
School Facts for Kids. Kiddle Encyclopedia.