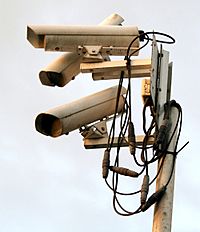 A nest of surveillance cameras

Surveillance means watching someone or something. It may be secret, and many methods are used including telephone tapping to listen to the person's calls and putting an electronic listening device, a bug, into a room.

Eavesdropping is also surveillance, but often without much planning. It means listening to things you aren't supposed to hear. It is a deliberate act, rather than simply overhearing someone else talking. 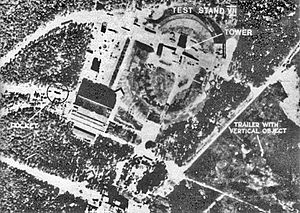 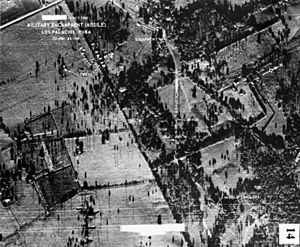 Soviet truck convoy carrying atomic missiles near San Cristobal, Cuba, on Oct. 14, 1962 (taken by a U-2)

This may include observation from a distance by means of electronic equipment (such as CCTV cameras), or interception of electronically transmitted information (such as internet traffic or phone calls).

Surveillance may include simple, relatively low-technology methods such as human intelligence agents and postal interception. On the other hand, global surveillance is done by satellite cameras on a daily basis. Such satellites are called "reconnaissance satellite" or spy satellites.

The word surveillance comes from a French phrase for "watching over" ("sur" means "from above" and "veiller" means "to watch").

All content from Kiddle encyclopedia articles (including the article images and facts) can be freely used under Attribution-ShareAlike license, unless stated otherwise. Cite this article:
Surveillance Facts for Kids. Kiddle Encyclopedia.