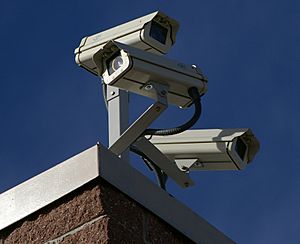 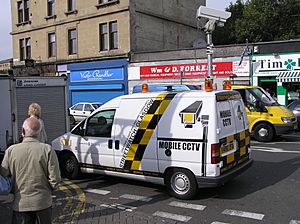 Closed Circuit Television (CCTV) is the use of video cameras to transmit signal to a specific, limited set of monitors. It differs from broadcast television in that the signal is not openly transmitted, though it may employ point to point wireless links. CCTV is often used for surveillance in areas that need monitoring such as banks, casinos, airports, military installations and convenience stores.

Increasing use of CCTV in public places has caused debate over public surveillance versus privacy. In industrial plants, CCTV equipment may be used to observe parts of a process that are remote from a control room, or where the environment is not comfortable for humans. CCTV systems may operate continuously or only as required to monitor a particular event. 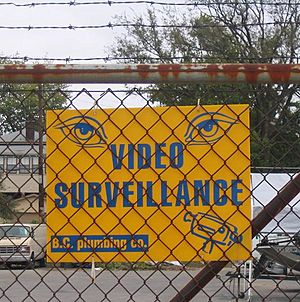 Sign warning that premises are watched by CCTV cameras.

The first CCTV system was installed by Siemens AG at Test Stand VII in Peenemünde, Germany in 1942, for observing the launch of V2-rockets. The noted German engineer Walter Bruch was responsible for the design and installation of the system. CCTV recording systems are often used at modern launch sites to record the flight of the rockets, in order to find the possible causes of malfunctions, while larger rockets are often fitted with CCTV allowing pictures of stage separation to be transmitted back to earth by radio link.

Industrial processes that take place under conditions dangerous for humans are today often supervised by CCTV. These are mainly processes in the chemical industry, the interior of reactors or facilities for manufacture of nuclear fuel. Use of thermographic cameras allow operators to measure the temperature of the processes. The usage of CCTV in such processes is sometimes required by law.

CCTV for use outside government special facilities was developed as a means of increasing security in banks. Today it has developed to the point where it is simple and inexpensive enough to be used in home security systems, and for surveillance.

A CCTV system may be installed where an operator of a machine cannot directly observe people who may be injured by unexpected machine operation. For example, on a subway train, CCTV cameras may allow the operator to confirm that people are clear of doors before closing them and starting the train. Operators of an amusement park ride may use a CCTV system to observe that people are not endangered by starting the ride. A CCTV camera and dashboard monitor can make reversing a vehicle safer, if it allows the driver to observe objects or people not otherwise visible.

Many cities and motorway networks have extensive traffic-monitoring systems, using closed-circuit television to detect congestion and notice accidents. Many of these cameras however, are owned by private companies and transmit data to drivers' GPS systems. 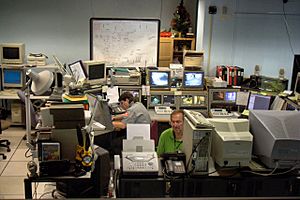 A surveillance room being surveyed itself.

Opponents of CCTV point out the loss of privacy of the people under surveillance, and the negative impact of surveillance on civil liberties. Furthermore, they argue that CCTV displaces crime, rather than reducing it.

Critics often dub CCTV as "Big Brother surveillance", a reference to George Orwell's novel Nineteen Eighty-Four, which featured a two-way telescreen in every home through which The Party would monitor the populace. The apartment in which George Orwell wrote now has 32 CCTV cameras within 200 yards of it.

More positive views of CCTV cameras have argued that the cameras are not intruding into people's privacy, as they are not surveilling private, but public space, where an individual's right to privacy can reasonably be weighted against the public's need for protection. 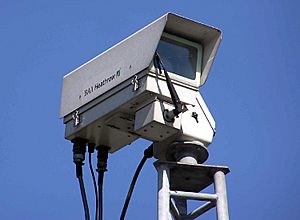 The first CCTV cameras used in public spaces were crude, conspicuous, low definition black and white systems without the ability to zoom or pan. Modern CCTV cameras use small high definition colour cameras that can not only focus to resolve minute detail, but by linking the control of the cameras to a computer, objects can be tracked semi-automatically. For example, they can track movement across a scene where there should be no movement, or they can lock onto a single object in a busy environment and follow it. Being computerised, this tracking process can also work between cameras.

The implementation of automatic number plate recognition produces a potential source of information on the location of persons or groups. CCTV critics see the most disturbing extension to this technology as the recognition of faces from high-definition CCTV images. This could determine a persons identity without alerting him that his identity is being checked and logged. The systems can check many thousands of faces in a database in under a second.

All content from Kiddle encyclopedia articles (including the article images and facts) can be freely used under Attribution-ShareAlike license, unless stated otherwise. Cite this article:
Closed-circuit television Facts for Kids. Kiddle Encyclopedia.