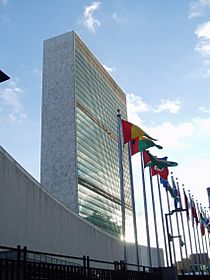 Its borders are First Avenue on the west, East 42nd Street to the south, East 48th Street on the north and the East River to the east. Turtle Bay is occasionally used as a metonym for the U.N. headquarters or for the U.N. as a whole. The building was designed by many architects across the world including Oscar Niemeyer.

All content from Kiddle encyclopedia articles (including the article images and facts) can be freely used under Attribution-ShareAlike license, unless stated otherwise. Cite this article:
United Nations Headquarters Facts for Kids. Kiddle Encyclopedia.