Sir Alfred Joseph Hitchcock (13 August 1899 – 29 April 1980) was an English film director and producer, widely regarded as one of the most influential and extensively studied filmmakers in the history of cinema. Known as "the Master of Suspense", he directed over 50 feature films in a career spanning six decades, becoming as well known as any of his actors thanks to his many interviews, his cameo roles in most of his films, and his hosting and producing of the television anthology Alfred Hitchcock Presents (1955–1965). His films collected a total of 46 Oscar nominations and six wins.

Born in Leytonstone, Essex, Hitchcock entered the film industry in 1919 as a title card designer after training as a technical clerk and copy writer for a telegraph-cable company. He made his directorial debut with a silent film in 1925. His first successful film, The Lodger: A Story of the London Fog (1927), helped to shape the thriller genre, while his 1929 film, Blackmail, was the first British "talkie".

Two of his 1930s thrillers, The 39 Steps (1935) and The Lady Vanishes (1938), are ranked among the greatest British films of the 20th century. By 1939 Hitchcock was a filmmaker of international importance, and film producer David O. Selznick persuaded him to move to Hollywood. A string of successful films followed.

The "Hitchcockian" style includes the use of camera movement to mimic a person's gaze and framing shots to maximise anxiety and fear.

In 2012, Vertigo replaced Orson Welles's Citizen Kane (1941) as the British Film Institute's greatest film ever made based on its world-wide poll of hundreds of film critics. By 2018 eight of his films had been selected for preservation in the United States National Film Registry.

He was married to Alma Reville, who helped write some of his movies.

He received the BAFTA Fellowship in 1971, the AFI Life Achievement Award in 1979 and was knighted in December that year, four months before he died. 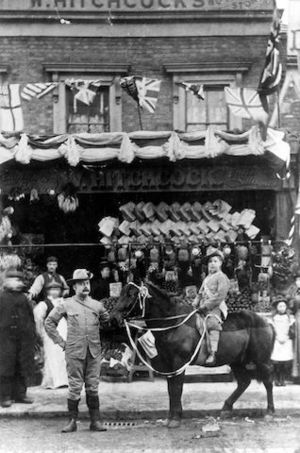 Alfred's father William Hitchcock outside the family shop in London, c. 1900; the sign above the store says "W. Hitchcock". The Hitchcocks used the pony to deliver groceries

Hitchcock was born in the flat above his parents' leased grocer's shop at 517 High Road, Leytonstone, on the outskirts of East London, the youngest of three children. Describing himself as a well-behaved boy—his father called him his "little lamb without a spot"—Hitchcock said he could not remember ever having had a playmate. One of his favourite stories for interviewers was about his father sending him to the local police station with a note when he was five; the policeman looked at the note and locked him in a cell for a few minutes, saying, "This is what we do to naughty boys." The experience left him, he said, with a lifelong fear of policemen; in 1973 he told Tom Snyder that he was "scared stiff of anything ... to do with the law" and wouldn't even drive a car in case he got a parking ticket. 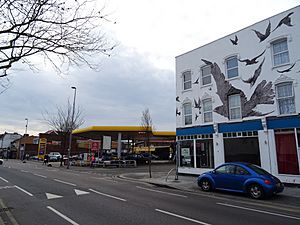 Petrol station at the site of 517 High Road, Leytonstone, where Hitchcock was born, the houses on the right display a mural from The Birds which Hitchcock directed

When he was six, the family moved to Limehouse where they ran as a fish-and-chips shop and fishmongers. It seems that Hitchcock was seven when he attended his first school, the Howrah House Convent in Poplar, which he entered in 1907. He also attended a convent school, the Wode Street School "for the daughters of gentlemen and little boys", run by the Faithful Companions of Jesus; briefly attended a primary school near his home; and was for a very short time, when he was nine, a boarder at Salesian College in Battersea.

The family moved again when he was 11, this time to Stepney, and on 5 October 1910 Hitchcock was sent to St Ignatius College in Stamford Hill, Tottenham with a reputation for discipline. The priests used a hard rubber cane on the boys, always at the end of the day, so the boys had to sit through classes anticipating the punishment once they knew they'd been written up for it. He said it was here that he developed his sense of fear. 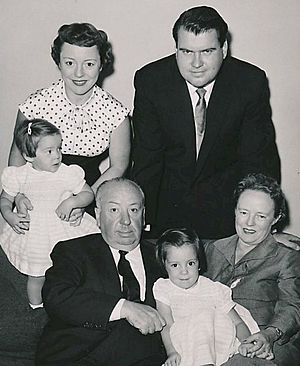 Alfred Hitchcock and his family circa 1955

Hitchcock told his parents that he wanted to be an engineer, and on 25 July 1913, he left St Ignatius and enrolled in night classes at the London County Council School of Engineering and Navigation in Poplar. Then on 12 December 1914 his father died at the age of 52. To support himself and his mother Hitchcock took a job, for 15 shillings a week as a technical clerk at the Henley Telegraph and Cable Company in Blomfield Street near London Wall. He kept up his night classes, this time in art history, painting, economics, and political science.

Hitchcock was too young to enlist when the First World War broke out in July 1914, and when he reached the required age of 18 in 1917, he joined a cadet regiment of the Royal Engineers and took part in weekend drills, and exercises.

After the war, Hitchcock began dabbling in creative writing. In June 1919 he became a founding editor and business manager of Henley's in-house publication, The Henley Telegraph, to which he submitted several short stories. Henley's promoted him to the advertising department, where he wrote copy and drew graphics for advertisements for electric cable. He apparently loved the job and would stay late at the office. He enjoyed watching films, especially American cinema; he watched Charlie Chaplin, D. W. Griffith and Buster Keaton, and particularly liked Fritz Lang's work. 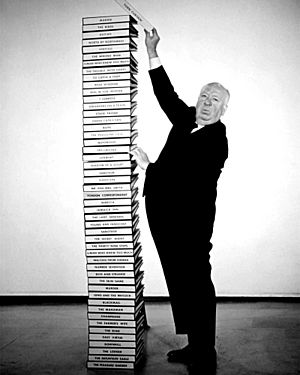 While still at Henley's, he read that Famous Players-Lasky, the production arm of Paramount Pictures, was opening a studio in London. He produced some drawings for the title cards for their first film to show and sent his work to the studio. They hired him, and in 1919 he began working for Islington Studios in Poole Street, Hoxton, as a title-card designer. Hitchcock gained experience as a co-writer, art director and production manager on at least 18 silent films.

When Paramount pulled out of London in 1922, Hitchcock was hired as an assistant director by a new firm run in the same location by Michael Balcon, later known as Gainsborough Pictures.

Hitchcock's first thriller, The Lodger: A Story of the London Fog (1927). Released in January 1927, The Lodger was a commercial and critical success in the UK. He made his first cameo appearance in the film because an extra was needed, and was depicted sitting in a newsroom, Hitchcock appears briefly in most of his own films. 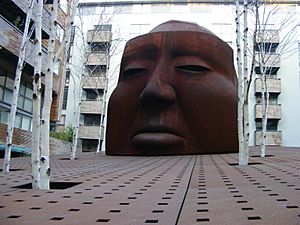 Failing health reduced Hitchcock's output during the last two decades of his life. Family Plot (1976) was Hitchcock's last film. Toward the end of his life, Hitchcock was working on the script for a spy thriller, The Short Night, it was never filmed. Hitchcock's health was declining. The screenplay was eventually published in Freeman's book The Last Days of Alfred Hitchcock (1999). 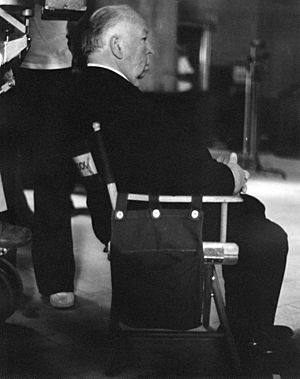 Hitchcock at work on location in San Francisco

Having refused a CBE in 1962, Hitchcock was appointed a Knight Commander of the Most Excellent Order of the British Empire (KBE) in the 1980 New Year Honours. He was too ill to travel to London, so on 3 January 1980 the British consul general presented him with the papers at Universal Studios. His last public appearance was on 16 March 1980, when he introduced the next year's winner of the American Film Institute award.

He died of kidney failure the following month, on 29 April, in his Bel Air home. Hitchcock was survived by his wife and daughter. His funeral was held at Good Shepherd Catholic Church in Beverly Hills on 30 April, after which his body was cremated. His remains were scattered over the Pacific Ocean on 10 May 1980. 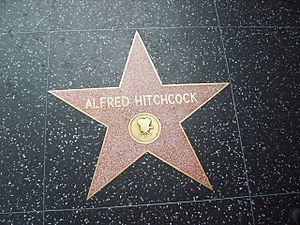 One of Hitchcock's stars on the Hollywood Walk of Fame

Hitchcock was inducted into the Hollywood Walk of Fame on 8 February 1960 with two stars: one for television and a second for his motion pictures. Hitchcock did more than any director to shape modern cinema, which would be utterly different without him.

He won two Golden Globes, eight Laurel Awards, and five lifetime achievement awards, including the first BAFTA Academy Fellowship Award and, in 1979, an AFI Life Achievement Award. He was nominated five times for an Academy Award for Best Director. By 2018, eight of his films had been selected for preservation by the US National Film Registry.

All content from Kiddle encyclopedia articles (including the article images and facts) can be freely used under Attribution-ShareAlike license, unless stated otherwise. Cite this article:
Alfred Hitchcock Facts for Kids. Kiddle Encyclopedia.