Marilyn Pauline "Kim" Novak (born February 13, 1933) is a retired American film and television actress. She began her film career in 1954 after signing with Columbia Pictures. There she starred in a string of movies. However, she is perhaps best known today for her performance as Madeline Elster/Judy Barton in Alfred Hitchcock's thriller Vertigo (1958) with James Stewart.

Although still only in her mid-30s, Novak withdrew from acting in 1966, and has only occasionally worked in films since. She appeared in The Mirror Crack'd (1980), and had a regular role on the primetime series Falcon Crest (1986–87). In 1991 she permanently retired from acting, stating she had no desire to return.

Her contributions to world cinema have been honored with two Golden Globe Awards, an Honorary Golden Bear Award, and a star on the Hollywood Walk of Fame among others. She works as a visual artist. 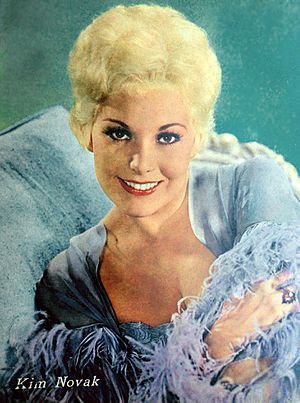 Novak was born in Chicago, Illinois on February 13, 1933. She is the daughter of Joseph and Blanche Novak. Both her parents were of Czech descent. Her father was a history teacher who took a job as a freight dispatcher on the Chicago, Milwaukee and St. Paul Railroad during the Depression, and her mother was a factory worker. She was raised Catholic.

She attended William Penn Elementary, Farragut High School, and Wright Junior College. She won two scholarships to the School of the Art Institute of Chicago, and during the summer break in her last semester of junior college, Novak went on a cross-country tour modeling for a refrigerator company at trade shows. 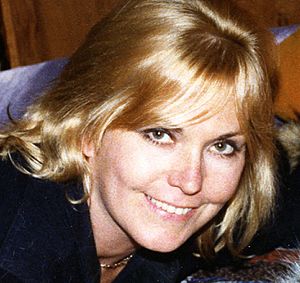 While stopping by Los Angeles, Novak was crowned "Miss Deepfreeze" by the refrigerator company.

While there, she and two other models stood in line to be extras, there she was discovered by an agent, who signed her to a long-term contract with Columbia Pictures. Columbia intended for Novak to be their successor to Rita Hayworth, their biggest star of the 1940s, also, the studio was hopeful that Novak would bring them the same box-office success Marilyn Monroe brought 20th Century-Fox. 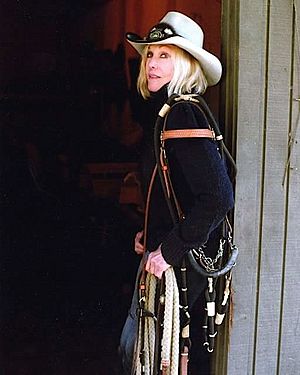 In the 1960s, Novak left Hollywood for Big Sur, where she raised horses and painted, making an occasional film. In 1974, she met her present husband, equine veterinarian Robert Malloy. They have been together ever since, and married on March 12, 1976. As a result of her marriage, she has two adult stepchildren. The couple built a log home along the Williamson River near Chiloquin, Oregon.

In 1997, Novak bought a 43-acre ranch in Sams Valley, Oregon, which they made into their home. Novak took classes in painting with pastels. In July 2000, their home burned to the ground, and she lost all her art and the only draft of the autobiography she had been working on for 10 years. Novak continues her creative endeavors today as a photographer, poet, and visual artist who paints in watercolor, oil, and pastel. Her paintings are impressionistic and surrealistic.

All content from Kiddle encyclopedia articles (including the article images and facts) can be freely used under Attribution-ShareAlike license, unless stated otherwise. Cite this article:
Kim Novak Facts for Kids. Kiddle Encyclopedia.