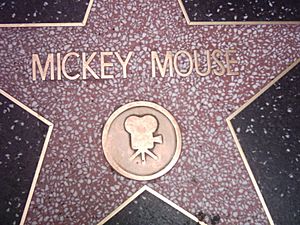 Mickey Mouse's star was the first awarded to an animated character

The Hollywood Walk of Fame is a sidewalk along Hollywood Boulevard and Vine Street in Hollywood, Los Angeles, California, USA, that is like an entertainment museum. There are over 2500 stars on the sidewalk. The names of famous entertainers and famous fictional characters are written on the stars.

The Hollywood Walk of Fame comprises more than 2,600 five-pointed terrazzo and brass stars embedded in the sidewalks along 15 blocks of Hollywood Boulevard and three blocks of Vine Street in Hollywood, California. The stars are permanent public monuments to achievement in the entertainment industry, bearing the names of a mix of actors, musicians, directors, producers, musical and theatrical groups, fictional characters, and others. The Walk of Fame is administered by the Hollywood Chamber of Commerce and maintained by the self-financing Hollywood Historic Trust. It is a popular tourist destination, with a reported 10 million visitors in 2003.

The Walk of Fame runs 1.3 miles (2.1 km) east to west on Hollywood Boulevard from Gower Street to La Brea Avenue, plus a short segment of Marshfield Way that runs diagonally between Hollywood and La Brea; and 0.4 miles (0.64 km) north to south on Vine Street between Yucca Street and Sunset Boulevard. According to a 2003 report by the market research firm NPO Plog Research, the Walk attracts about 10 million visitors annually—more than Sunset Strip, TCL Chinese Theatre (formerly Grauman's), the Queen Mary, and the Los Angeles County Museum of Art—and has played an important role in making tourism the largest industry in Los Angeles County.

As of 2017[update], the Walk of Fame comprises over 2,600 stars, spaced at 6-foot (1.8 m) intervals. The monuments are coral-pink terrazzo five-point stars rimmed with brass (not bronze, an oft-repeated inaccuracy) inlaid into a charcoal-colored terrazzo background. In the upper portion of each star field the name of the honoree is inlaid in brass block letters. Below the inscription, in the lower half of the star field, a round inlaid brass emblem indicates the category of the honoree's contributions. The emblems symbolize five categories within the entertainment industry:

Of all the stars on the Walk to date, 47% have been awarded in the motion pictures category, 24% in television, 17% in audio recording, 10% in radio, and less than 2% in the live performance category. Approximately 20 new stars are added to the Walk each year.

The monuments for the Apollo 11 mission to the Moon are uniquely shaped: Four identical circular moons, bearing the names of the three astronauts (Neil A. Armstrong, Edwin E. Aldrin Jr., Michael Collins) the date of the first Moon landing ("7/20/69"), and the words "Apollo XI", are set on each of the four corners of the intersection of Hollywood and Vine. The moons are silver and grey terrazzo circles rimmed in brass on a square pink terrazzo background, with the television emblem inlaid at the top of each circle.

All content from Kiddle encyclopedia articles (including the article images and facts) can be freely used under Attribution-ShareAlike license, unless stated otherwise. Cite this article:
Hollywood Walk of Fame Facts for Kids. Kiddle Encyclopedia.