Michael Collins (born October 31, 1930 in Rome, Italy) was an American astronaut and test pilot. He was the pilot of the Apollo 11 mission to the moon.

Collins went to the United States Military Academy. After training, he joined the United States Air Force. He flew F-86s at Chambley-Bussieres Air Base, France. He got into the USAF Experimental Flight Test Pilot School at Edwards Air Force Base in 1960. He tried to get into the second astronaut training group but he was not accepted. He did get into the third group.

Collins joined the third group of fourteen astronauts in 1963. He had 2 space flights. His first spaceflight was in Gemini 10. With John Young they joined up in space with two different spacecraft. Collins also did two space walks.

His second space flight was in Apollo 11 where he was the command module pilot. While he kept going around the Moon, Neil Armstrong and Buzz Aldrin landed on the lunar surface. He is one of only 24 people to have flown to the Moon. 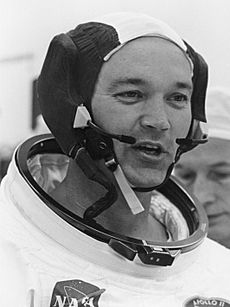 Collins suiting up for the Apollo 11 flight

For the third group of astronauts, training began with a 240-hour course of the basics of spaceflight. Fifty-eight hours of this was devoted to geology, something that Collins did not readily understand and in which he never became very interested. At the end, Alan Shepard, who was head of the astronaut office, asked the fourteen to rank their fellow astronauts in the order they would want to fly with them in space. Collins picked David Scott in the number one position.

After this basic training, the third group were assigned specializations, with Collins receiving his first choice of pressure suits and extravehicular activities (EVAs, also known as spacewalks). His job was to monitor the development and act as a liaison between the Astronaut Office and contractors. Collins was bothered during the secretive planning of Ed White's EVA on Gemini 4, because he was not involved.

In late June 1965, Collins received his first crew assignment: the backup pilot for Gemini 7. He was the first of the 14 to receive a crew assignment, though would not be the first to fly; that honor went to David Scott on Gemini 8. 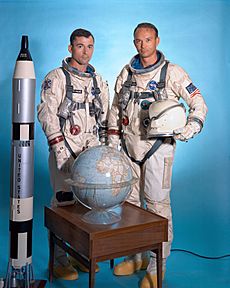 After the successful completion of Gemini 7, on January 24, 1966 Collins was assigned to the prime crew of Gemini 10 with John Young, with White moving onto the Apollo program. Since Gemini 9's EVA ran into problems, the remaining Gemini objectives had to be completed on the last three flights. While the overall number of objectives increased, the difficulty of Collins' EVA was scaled significantly back. There was no backpack or astronaut maneuvering unit (AMU), as there had been on Gemini 8.

Their three-day mission called for them to rendezvous with two different Agena Target Vehicles, undertake two EVAs, and perform 15 different experiments. The training went smoothly, as the crew learned the intricacies of orbital rendezvous, controlling the Agena and, for Collins, EVA. For what was to be the fourth ever EVA, underwater training was not performed, mostly because Collins did not have the time. To train to use the nitrogen gun he would use for propulsion, a super smooth metal surface about the size of a boxing ring was set up. He would stand on a circular pad that used gas jets to raise itself off the surface. Using the nitrogen gun he would practice propelling himself across the "slippery table".

Collins and Young completed all of the major objectives of the flight. The mission called for multiple dockings with the Agena target, but Collins' error in using the sextant caused them to burn valuable fuel, causing mission control to call off this objective. Once docked, the Agena thrust the astronauts to a new altitude record, 474 miles above the Earth and greater than the 295 miles achieved by Voshkod 2.

For his first EVA Collins did not leave the Gemini capsule, but stood up through the hatch with a device that resembled a sextant. In his biography he said he felt at that moment like a Roman god riding the skies in his chariot. The EVA started on the dark side of the Earth so that Collins could take photos of the Milky Way. His eyes teared up, forcing an early end to the EVA.

Prior to Collins' second EVA, the Agena spacecraft was jettisoned. Young positioned the capsule close enough to Agena 8 for Collins to get to it while attached to his 49 foot umbilical. Collins thought it took much longer to complete tasks than he expected, as Cernan had experienced during his spacewalk. He removed a micro-meteor experiment from the exterior of the spacecraft, and configured his nitrogen maneuvering thruster. Collins had difficulty re-entering the spacecraft, and required Young to pull him back in with the umbilical. The duo continued with more experiments, and then splashed down in the Atlantic, 3.5 miles from the amphibious assault ship USS Guadalcanal. 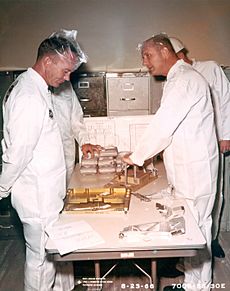 The backup crew for the second manned Apollo flight. Collins is on the left, and on the right Thomas Stafford blocks the view of Frank Borman

Shortly after Gemini 10, Collins was assigned to the backup crew for the second manned Apollo flight, with Commander Frank Borman, Command Module Pilot (CMP) Thomas Stafford and Collins as Lunar Module Pilot (LMP). Along with learning the new Apollo Command/Service Module (CSM) and the Apollo Lunar Module (LM), Collins received helicopter training, as these were thought to be the best way to simulate the landing approach of the LM. After the completion of Project Gemini, it was decided to cancel the Apollo 2 flight, since it would just repeat the Apollo 1 flight. In the process of crews being reassigned, Collins was moved to the CMP position on the Apollo 8 prime crew, since his new crewmates were Borman and William Anders. Deke Slayton had decided the CMP should have some spaceflight experience, something Anders did not have. Three years later, this change would be the reason Collins orbited the Moon while Armstrong and Aldrin walked on its surface.

Staff meetings were always held on Fridays in the Astronaut Office and it was here that Collins found himself on January 27, 1967. Don Gregory was running the meeting in the absence of Alan Shepard and so it was he who answered the red phone to be informed there was a fire in the Apollo 1 CM. When the enormity of the situation was ascertained, it fell on Collins to go the Chaffee household to tell Martha Chaffee her husband had died. The Astronaut Office had learned to be proactive in informing astronauts' families of a death quickly, because of the death of Theodore Freeman in an aircraft crash, when a newspaper reporter was the first to his house.

Collins and David Scott were sent by NASA to the Paris Air Show in May 1967. There they met cosmonauts Pavel Belyayev and Konstantin Feoktistov, with whom they drank vodka on the Soviet's Tupolev Tu-134. Collins found it interesting that some cosmonauts were doing helicopter training like their American counterparts, and Belyayev said that he hoped to make a circum-lunar flight soon. The astronauts' wives had accompanied them on the trip, and Collins and his wife Pat were somewhat forced by NASA and their friends to travel to Metz where they had been married ten years before. There, they found a third wedding ceremony had been arranged for them (ten years previously they had already had civil and religious ceremonies).

Having trained for the flight, Collins was made a capsule communicator (CAPCOM), an astronaut stationed at Mission Control responsible for communicating directly with the crew during a mission. As part of the Green Team, he covered the launch phase up to translunar injection, the rocket burn that sent Apollo 8 to the Moon. The successful completion of the first manned circum-lunar flight was followed by the announcement of the Apollo 11 crew of Armstrong, Aldrin, and Collins. At that time in January 1969, it was not certain this would be the lunar landing crew, depending on the success of Apollo 9 and Apollo 10 testing the Lunar Module. 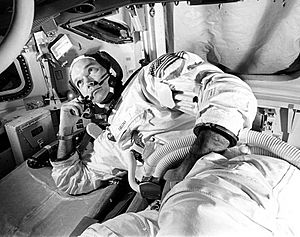 As CMP, Collins's training was completely different from the LM and lunar EVA, and was sometimes done without Armstrong or Aldrin being present. Along with simulators, there were size measurements for pressure suits, centrifuge training to simulate the 10 g reentry, and practicing docking with a huge rig at NASA Langley Research Center, Hampton, Virginia, just to name a few. Since he would be the active participant in the rendezvous with the LM, Collins compiled a book of 18 different rendezvous schemes for different scenarios including where the LM did not land, or launched too early or too late. This book ran for 117 pages.

The famous mission patch of Apollo 11 was the creation of Collins. Jim Lovell, the backup commander, mentioned the idea of eagles, a symbol of the United States. Collins liked the idea and found a painting by artist Walter Weber in a National Geographic book, Water, Prey, and Game Birds of North America, traced it and added the lunar surface below and Earth in the background. The idea of an olive branch, a symbol of peace, came from a computer expert at the simulators. The call sign Columbia for the CSM came from Julian Scheer, the NASA Assistant Administrator for Public Affairs. He mentioned the idea to Collins in a conversation and Collins could not think of anything better. It was during the training for Apollo 11 Collins told Deke Slayton he did not want to fly again. Slayton offered to get him back into the crew sequence after the flight, and according to Collins, this would probably have been as backup commander of Apollo 14 followed by commander of Apollo 17. 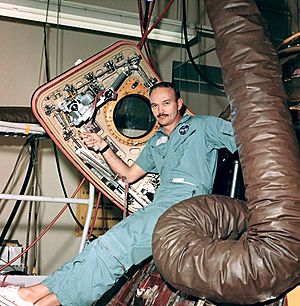 During his day flying solo around the Moon, Collins never felt lonely. Although it has been said "not since Adam has any human known such solitude", Collins felt very much a part of the mission. In his autobiography he wrote "this venture has been structured for three men, and I consider my third to be as necessary as either of the other two". During the 48 minutes of each orbit he was out of radio contact with Earth, the feeling he reported was not loneliness, but rather "awareness, anticipation, satisfaction, confidence, almost exultation".

After spending so much time with the CSM, Collins felt compelled to leave his mark on it, so during the second night following their return from the Moon, he went to the lower equipment bay of the CM and wrote:

In a July 2009 interview with The Guardian, Collins revealed he was very worried about Armstrong and Aldrin's safety. He was also concerned in the event of their deaths on the Moon, he would be forced to return to Earth alone and, as the mission's sole survivor, be regarded as "a marked man for life".

Collins left NASA in 1970. He took a job in the Department of State as Assistant Secretary for Public Affairs. A year later he became the director of the National Air and Space Museum. He did this job until 1978. He then became the undersecretary of the Smithsonian Institution. In 1980 he took the job as Vice President of LTV Aerospace. He left in 1985 to start his own business.

He is married to Patricia. They have three children: Kate, Ann and Michael, Jr. Kate is an actress, best known for her role as Natalie Marlowe Dillon in the daytime television drama All My Children.

All content from Kiddle encyclopedia articles (including the article images and facts) can be freely used under Attribution-ShareAlike license, unless stated otherwise. Cite this article:
Michael Collins (astronaut) Facts for Kids. Kiddle Encyclopedia.