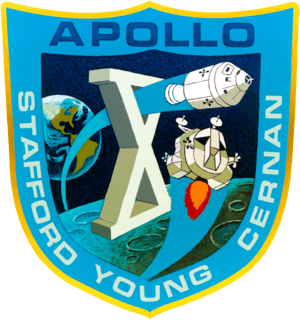 Apollo 10 was a manned F-Type mission of NASA's Apollo program to land a man on the surface of the Moon. It was the fourth manned mission and was a full rehearsal for the actual landing by Apollo 11. It was launched on May 10, 1969. The three astronauts,Tom Stafford, John W. Young and Eugene Cernan went into orbit around the Moon. Stafford and Cernan flew the Lunar Module to just 14.5 km (9 mi) above the Moon's surface. The Apollo 10 crew reached the farthest point in their orbit around the far side of the Moon. They have been the farthest any human has traveled from the Earth's surface.

All content from Kiddle encyclopedia articles (including the article images and facts) can be freely used under Attribution-ShareAlike license, unless stated otherwise. Cite this article:
Apollo 10 Facts for Kids. Kiddle Encyclopedia.