The Apollo program (or Project Apollo) was a project by the United States' National Aeronautics and Space Administration (NASA). The goal was to send a human to explore the Moon and bring him home to earth safely. It was started by US President John F. Kennedy in 1961. He said:

Now it is time to take longer strides - time for a great new American enterprise - time for this nation to take a clearly leading role in space achievement, which in many ways may hold the key to our future on Earth.

...I believe that this nation should commit itself to achieving the goal, before this decade is out, of landing a man on the Moon and returning him safely to the Earth. No single space project in this period will be more impressive to mankind, or more important in the long-range exploration of space; and none will be so difficult or expensive to accomplish. Full text

One reason the program started was that the Soviet Union was the first country to send a person into outer space. Since this was during the Cold War, many in the US thought that the US needed to stay ahead of the USSR in space exploration.

The Apollo spacecraft was made up of a Command and Service Module, and a Lunar Module. The Command Module was a space capsule. The Lunar Module was a lander. These spacecraft docked on the way to the Moon. Mercury and Gemini spaceships were very small and cramped, but the Apollo capsule was much bigger. Astronauts could move around and not have to stay in their seats. The Lunar Lander was also big on the inside. The only part of the Apollo spacecraft to come back to Earth was the capsule, the Lunar Module would crash on the moon.

The Apollo program ended in 1975. After that, NASA began to work on the Space Shuttle program, the International Space Station, and many unmanned space exploration projects.

There was a movie made about the problems that happened on the Apollo 13 mission.

In September 1967, Owen Maynard of the Manned Spacecraft Center in Houston, Texas came up with a series of Apollo missions that would lead to landing a person on the Moon. There were seven types of mission, each testing a specific set of parts and tasks. Each step would need to be completed successfully before the next mission type could begin. These were:

The first manned Lunar Module, LM-3, was not ready for the December 1968 launch date of Apollo 8. The mission flew as a lunar orbital mission, using just the CSM. The E mission was canceled.

The first landing would be followed by more advanced lunar missions: 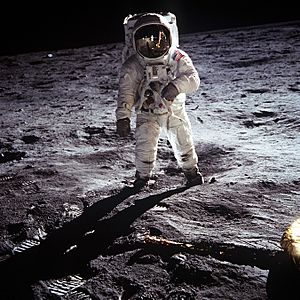 The Apollo flights were carried into space by the Saturn I and V rockets. 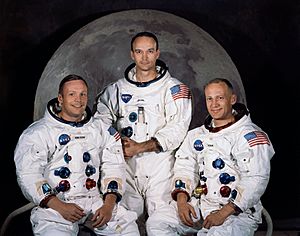 All content from Kiddle encyclopedia articles (including the article images and facts) can be freely used under Attribution-ShareAlike license, unless stated otherwise. Cite this article:
Apollo program Facts for Kids. Kiddle Encyclopedia.