John Cornelius Houbolt (April 10, 1919 – April 15, 2014) was an aerospace engineer credited with leading the team behind the lunar orbit rendezvous (LOR) mission mode, a concept that was used to successfully land humans on the Moon and return them to Earth. This flight path was first endorsed by Wernher von Braun in June 1961 and was chosen for Apollo program in early 1962. The critical decision to use LOR was viewed as vital to ensuring that Man reached the Moon by the end of the decade as proposed by President John F. Kennedy. In the process, LOR saved time and billions of dollars by efficiently using existing rocket technology.

Houbolt was born in Altoona, Iowa in 1919. He spent part of his childhood in Joliet, Illinois, where he attended Joliet Central High School and Joliet Junior College. He attended the University of Illinois at Urbana–Champaign, earning a Bachelors (1940) and a Masters (1942) degree in civil engineering. He later received a PhD in Technical Sciences in 1957 from ETH Zurich. Houbolt began his career at the National Advisory Committee for Aeronautics in 1942, and stayed on at NASA after it succeeded NACA, until retirement in 1985.

Houbolt was an engineer at the Langley Research Center in Hampton, Virginia, and he was one of the most vocal of a minority of engineers who supported LOR and his campaign in 1961 and 1962. Once this mode was chosen in 1962, many other aspects of the mission were significantly based on this fundamental design decision. He was a guest at Mission control for the Apollo 11 lunar landing.

In later years he lived in Scarborough, Maine. He died at a nursing home there in 2014 of Parkinson's disease.

In the HBO miniseries From the Earth to the Moon, Houbolt was played by Reed Birney. 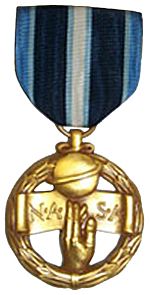 He was awarded the NASA Exceptional Scientific Achievement Medal in 1963. He was a member of the National Academy of Engineering. He was awarded an honorary doctorate, awarded on May 15, 2005 at the University of Illinois at Urbana-Champaign, and his papers were deposited in the University of Illinois Archives. In 2009, the Illinois House of Representatives adopted HR 540 in his honor. He is additionally commemorated in the city of Joliet: The street fronting Joliet Junior College, which he attended, was renamed Houbolt Road; a mural in Joliet Union Station includes a Lunar Module, in reference to his work for NASA; and a wing of the Joliet Area Historical Museum became a permanent exhibit to celebrate his achievements. 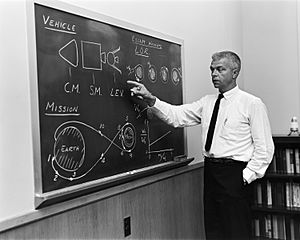 Although the basics of the lunar orbit rendezvous (LOR) concept had been expressed as early as 1916 by Yuri Kondratyuk and 1923 by German rocket pioneer Hermann Oberth, NASA would provide the first practical application of the concept. Some engineers were concerned about the risks of space rendezvous, especially in lunar orbit, where there would be no fallback options in case of a major mishap. Houbolt had presented the LOR concept to a series of panels. After many technical conferences debating Direct ascent, Earth orbit rendezvous, and LOR, Wernher von Braun supported the concept.

All content from Kiddle encyclopedia articles (including the article images and facts) can be freely used under Attribution-ShareAlike license, unless stated otherwise. Cite this article:
John Houbolt Facts for Kids. Kiddle Encyclopedia.