When it was in active service, Joliet Union Station was at the junction of the former Rock Island Line, Atchison, Topeka, and Santa Fe, and Alton Railroad main lines. Therefore, it has two different milepost numbers depending on how far each route is to Chicago. On The Metra Rock Island District Line, Joliet is 40.2 miles (64.7 km) away from LaSalle Street Station, the northern terminus of the line in Downtown Chicago. On The Metra Heritage Corridor and Amtrak routes, 37.2 miles (59.9 km) away from Chicago Union Station, the northern terminus of the line.

The Rock Island line runs via Blue Island, Illinois to LaSalle Street Station (track owned by Metra), while the Metra Heritage Corridor line runs via Summit, Illinois to Chicago's Union Station (track owned by Canadian National). The Blue Island trains leave from a single track on the south side of the station, while four tracks on the east side serve Amtrak, Metra Heritage, BNSF freight, and Union Pacific freight trains (BNSF owns the western two tracks, while UP owns the eastern two). CSX takes over ownership of the Rock Island tracks just west of the station, with trackage rights from the Iowa Interstate Railroad.

Five Amtrak trains on the Chicago – St. Louis corridor stop in Joliet daily each way: the Texas Eagle and the Lincoln Service. This was also a stop for the Ann Rutledge until April 2007.

Train service to Joliet was begun by the Chicago and Rock Island Railroad, a predecessor of the Rock Island Line, in 1852. Joliet Union Station was designed by architect Jarvis Hunt in the Beaux Arts Classical style, and was built in 1912. The City of Joliet owns two thirds of the station and Metra owns the other third. The former waiting room has been converted to a banquet hall that can hold 350 guests. 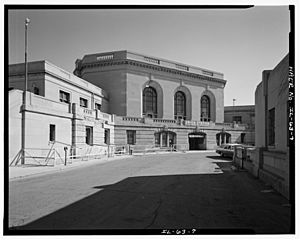 When originally built, there were pedestrian tunnels between the terminal and a platform between the first and second track on both the south and east sides of the building. Canopies also covered those platforms. However, the tunnels were later closed and the canopies removed. Finally passenger service on the east side of the building was moved to the third and fourth rails, requiring passengers to cross over the freight tracks to access the trains. Later the number of Rock Island tracks on the south side of the building was reduced from four to one.

The state government of Illinois announced, on October 28, 2010, a $42 million long-term plan to replace Joliet Union Station and partly rebuild the tracks. Separate tracks, dedicated solely to freight traffic, will be laid for BNSF container stacktrains. Rail passengers will be rerouted into a new multimodal train and bus station. $32 million came from "Illinois Jobs Now!", a six-year, $31 billion statewide capital program supported by 20 year state bonds and federal and local matching funds. The BNSF Railway also pledged $2.2 million and the city contributed $7.5 million. The existing Union Station building will remain, but a new terminal was built beside it. New tunnels provide Metra access to the Heritage Corridor Line trains, eliminating the need to cross the BNSF freight tracks. The project includes a new 500-car parking garage. The new transportation center opened on April 11, 2018.

Currently Metra controls the interlocking tower at the junction of the Rock Island and BNSF tracks. As a result, Metra makes freight trains stop in order to give Metra passenger trains priority. Under the grant, control of the interlock would be shifted to the BNSF and Union Pacific and the tower building itself will be preserved. The Metra Rock Island passenger platform would be moved across the diamond to the east side of the BNSF tracks to avoid conflict with the flow of freight trains.

All content from Kiddle encyclopedia articles (including the article images and facts) can be freely used under Attribution-ShareAlike license, unless stated otherwise. Cite this article:
Joliet Union Station Facts for Kids. Kiddle Encyclopedia.