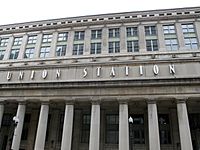 Union Station is a major railroad station that opened in 1925 in Chicago. It replaced an earlier station built in 1881. It is now the only intercity rail terminal in Chicago, as well as being the city's primary terminal for commuter trains.

The station stands on the west side of the Chicago River between West Adams Street and West Jackson Boulevard, just outside the Chicago Loop. Including approach and storage tracks, it is about nine and a half city blocks in size. Its facilities are mostly underground, buried beneath streets and skyscrapers. It is located near the Willis Tower.

All content from Kiddle encyclopedia articles (including the article images and facts) can be freely used under Attribution-ShareAlike license, unless stated otherwise. Cite this article:
Chicago Union Station Facts for Kids. Kiddle Encyclopedia.