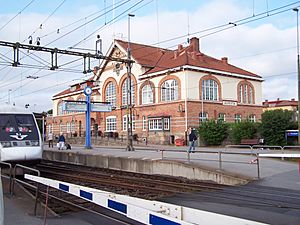 A train station or railway station (also called a railroad station, rail station, or depot) is a place where passengers can get on and off trains and/or goods may be loaded or unloaded.

Early stations were usually built to handle passengers and goods. Today, goods are usually only unloaded at big stations. Stations are next to a railway line, or they are the terminus for a route. Usually there are platforms to let passengers get on and off the train easily and safely. Many stations have things such as shelters, ticket sales and benches.

Railway stations usually have either ticket booths, or ticket machines. Ticket sales can also be together with an information desk or a shop. Many stations have a shop or a kiosk.

Bigger stations often have fast-food or restaurants. In some countries these stations also have a bar, or a pub. Other station facilities are: toilets, luggage rooms, lost-and-found (lost property office), timetables, trolleys, waiting rooms, taxi ranks and bus stops.

All content from Kiddle encyclopedia articles (including the article images and facts) can be freely used under Attribution-ShareAlike license, unless stated otherwise. Cite this article:
Train station Facts for Kids. Kiddle Encyclopedia.