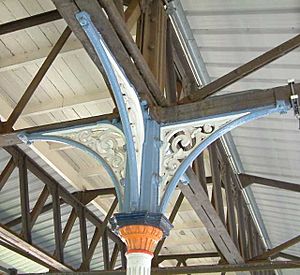 Clapham Junction railway station is a train station in Battersea in the London Borough of Wandsworth. It is on St. John's Hill in the south west of Battersea. 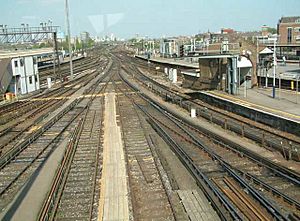 All services to Waterloo and many services to Victoria and Croydon stations pass through the junction; these include South West Trains, Gatwick Express and Southern services. Services from Clapham Junction also head north along the West London line, through West Brompton and Kensington (Olympia), on to Willesden Junction and Watford Junction - services (to Willesden Junction) are operated by London Overground.

Typical off-peak service of about 110 trains (one train every 30 seconds) is: 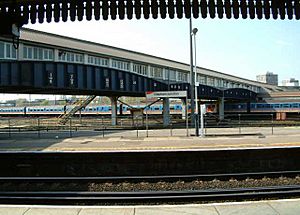 The station has 16 platforms, numbered 2 to 17, and arranged in two groups. Platform 1, the northernmost platform, is no longer used. It does not have any rails. If the planned East London Line extension gets to Clapham Junction, the platform may be used again. The station's main entrance is from St. John's Hill, into a foot tunnel which is 15 ft (4.6 m) wide. It runs under the eastern end of the 17 platforms, and to a northern exit, which has restricted opening hours. The foot tunnel becomes very crowded during the morning and evening rush hours, and ticket barriers at the end of the tunnel are a particular pinch point.

A covered footbridge connects the platforms at their western end. The footbridge does not have an exit to or from the station.

The station is named Clapham Junction because it is close to the joining point of a number of major rail lines—although the name is not shared by any junction near the station. The names of the nearby rail junctions are:

All content from Kiddle encyclopedia articles (including the article images and facts) can be freely used under Attribution-ShareAlike license, unless stated otherwise. Cite this article:
Clapham Junction railway station Facts for Kids. Kiddle Encyclopedia.