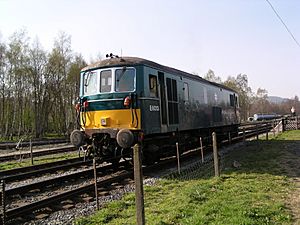 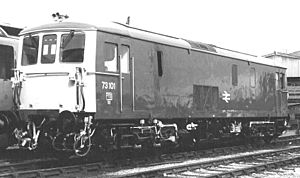 The British Rail Class 73 electro-diesel locomotives are very unusual in that they can operate from a 750 V DC third-rail supply but also have a diesel engine to allow them to operate on non-electrified routes. This makes them very versatile, although the diesel engine produces less power than is available from the third-rail supply so they rarely stray from the former Southern Region of British Rail. Following the withdrawal of the more powerful Class 74 electro-diesels in 1977, the Class 73 is now unique on the British rail system.

All content from Kiddle encyclopedia articles (including the article images and facts) can be freely used under Attribution-ShareAlike license, unless stated otherwise. Cite this article:
British Rail Class 73 Facts for Kids. Kiddle Encyclopedia.