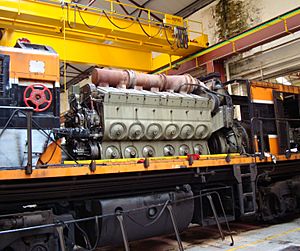 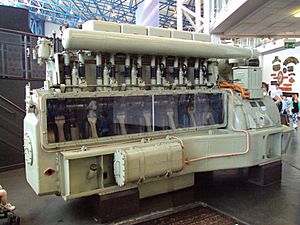 Power unit (engine and generator right) from a diesel-electric locomotive

The engine (prime mover) and generator set of a diesel-electric locomotive are sometimes coupled as a removable unit called "the power unit".

The power unit represents the main weight in a locomotive design, other than the chassis or body. Its position back and forth is at the designer's choice and may be used to control overall weight distribution. In most locomotives designs, the power unit is placed centrally. In some locomotives, it is offset to one end, or the heavier engine is outboard of the generator. In extreme cases, such as C-B wheel arrangements, the weight on each bogie may differ so much that the engine-end bogie is given an extra carrying axle, to keep individual axle loads more consistent.

All content from Kiddle encyclopedia articles (including the article images and facts) can be freely used under Attribution-ShareAlike license, unless stated otherwise. Cite this article:
Prime mover (locomotive) Facts for Kids. Kiddle Encyclopedia.