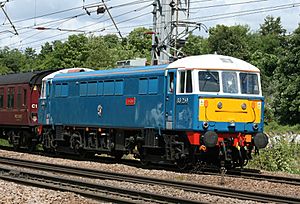 An electric locomotive runs on electricity as the name suggests. Electric locomotives cost the least to buy and operate. However, the railway electrification system is very expensive, so only tracks used by many trains per day are usually electrified. Thus, electrics are only the second next used type, behind diesel locomotives.

Electric locomotives get their power from three main sources: overhead lines, an on-board battery, or a third rail.

All content from Kiddle encyclopedia articles (including the article images and facts) can be freely used under Attribution-ShareAlike license, unless stated otherwise. Cite this article:
Electric locomotive Facts for Kids. Kiddle Encyclopedia.