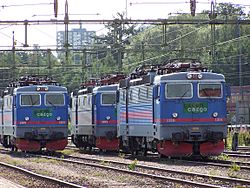 Electric locomotives under the wires in Sweden 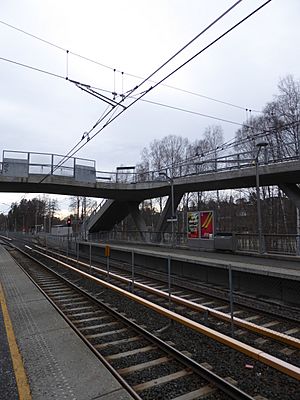 A railway electrification system supplies electrical energy to railway locomotives and multiple units so that they can operate without having an on-board prime mover. Their main advantages are high energy efficiency and low operating cost. Building their wires and other infrastructure is expensive, however.

Electricity may be sent to the train in different ways. Different countries use different systems. The most widely used systems are:

All content from Kiddle encyclopedia articles (including the article images and facts) can be freely used under Attribution-ShareAlike license, unless stated otherwise. Cite this article:
Railway electrification system Facts for Kids. Kiddle Encyclopedia.