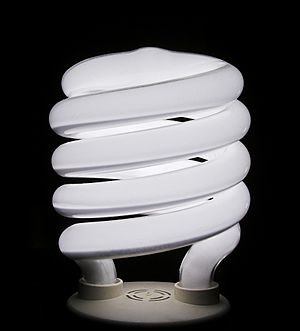 A compact fluorescent lamp, which has been popular among North American consumers since its introduction in the mid 1990s.

Energy efficiency is using less energy to provide the same level of energy service. An example would be insulating a home to use less heating and cooling energy to achieve the same temperature. Another example would be installing fluorescent lights and/or skylights instead of incandescent bulbs to attain the same level of illumination. So efficient energy use is achieved primarily by means of a more efficient technology rather than by changes in individual behaviour.

Energy conservation is using less energy to achieve a lesser energy service, and usually involves a change in behavior. Examples would be heating a room less in winter, or driving less, or working in a less brightly lit room.

As with other definitions, the boundary between efficient energy use and energy conservation can be fuzzy, but both are important in environmental and economic terms. This is especially the case when actions are directed at the saving of fossil fuels.

All content from Kiddle encyclopedia articles (including the article images and facts) can be freely used under Attribution-ShareAlike license, unless stated otherwise. Cite this article:
Energy efficiency Facts for Kids. Kiddle Encyclopedia.