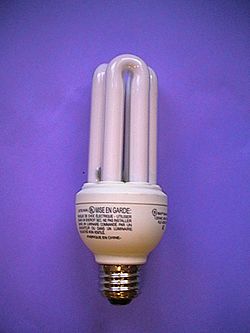 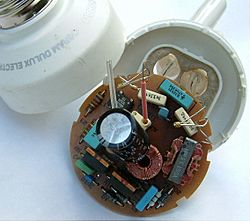 As in other fluorescent lamps, electrified mercury vapor emits ultraviolet (UV) light. A phosphor converts it to visible light. The ballast prevents too much electricity from flowing through the tube. It is usually in the plastic base of the bulb. If the ballast is in the bulb, the bulb is called a self-ballasted lamp. Most are electronic ballasts.

The average rated life of a CFL is 8 to 15 times longer that of incandescents. CFLs typically have a rated lifespan of 6,000 to 15,000 hours, whereas incandescent lamps are usually manufactured to have a lifespan of 750 hours or 1,000 hours.

The lifetime of any lamp depends on many factors, including operating voltage, manufacturing defects, exposure to voltage spikes, mechanical shock, frequency of cycling on and off, lamp orientation, and ambient operating temperature. The life of a CFL is significantly shorter if it is turned on and off frequently. In the case of a 5-minute on/off cycle the lifespan of a CFL can be reduced to "close to that of incandescent light bulbs". The U.S. Energy Star program suggests that fluorescent lamps be left on when leaving a room for less than 15 minutes to avoid this problem. If the light must be switched on and off frequently, Cold cathode CFLs can be used. Cold cathode CFLs are designed for many more on/off cycles than standard CFLs.

The mercury inside the tube is toxic and makes these bulbs hazardous waste. The bulbs must be taken to a recycling center after they stop working. Most CFLs contain an amount of mercury smaller than the tip of a ballpoint pen. During normal use, the mercury cannot escape, although it will escape if the bulb is broken. If a single bulb breaks, it is not usually a cause for concern. It is recommended to open windows to air out the room, and to clean up broken glass with duct tape instead of a vacuum cleaner.

High-intensity discharge bulbs such as sodium-vapor, mercury-vapor, and metal-halide lamps are another alternative, especially for lighting large areas, although like fluorescent lamps they contain mercury. Their main advantage is much higher light output.

All content from Kiddle encyclopedia articles (including the article images and facts) can be freely used under Attribution-ShareAlike license, unless stated otherwise. Cite this article:
Compact fluorescent lamp Facts for Kids. Kiddle Encyclopedia.