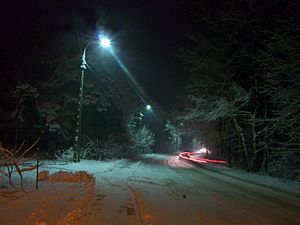 A mercury-vapor lamp is a special lamp. It makes light by a spark in a tube that contains mercury.

The spark makes the mercury atoms release ultraviolet and visible light. In some bulbs, the ultraviolet light shines on phosphors which make white light from it, although not all mercury-vapor lamps use phosphors.

The EU wants to ban them because they contain large amounts of mercury and are not efficient like fluorescent bulbs. They last much longer though. They are the bluish streetlights.

Depending on the quality of the bulb, age of the bulb, phosphor used, and other chemicals added to the mercury, the color of the light can vary from blue-white to green-white, to almost pure white. A green tint usually indicates an older bulb, although it doesn't necessarily mean that the bulb is about to burn out.

All content from Kiddle encyclopedia articles (including the article images and facts) can be freely used under Attribution-ShareAlike license, unless stated otherwise. Cite this article:
Mercury-vapor lamp Facts for Kids. Kiddle Encyclopedia.