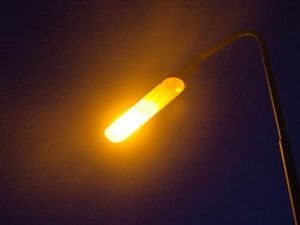 A streetlight is a light bulb on a pole used for lighting streets. Streets can be lit for safety or visibility reasons, so people can see where they are walking at night. Streetlights are normally either orange or blue. The blue ones are mercury-vapor lamps. They are older and last longer. The orange ones are sodium vapor lamps. They are newer and more efficient.

All content from Kiddle encyclopedia articles (including the article images and facts) can be freely used under Attribution-ShareAlike license, unless stated otherwise. Cite this article:
Streetlight Facts for Kids. Kiddle Encyclopedia.