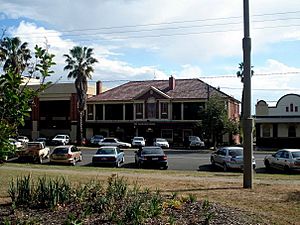 Tamworth is a city in the New England region of New South Wales, Australia. Straddling the Peel River, Tamworth is the major regional centre for the New England region and is in the local government area of Tamworth Regional Council. Approximately 318 km (198 mi) from the Queensland border, the city is located almost midway between Brisbane and Sydney, the two largest cities on the Australian east coast. The city had an estimated population of 42,255 people at 30 June 2015 .

The city is known as the "First City of Lights", being the first place in Australia to use electric street lights in 1888. Tamworth is also famous as the "Country Music Capital of Australia", annually hosting the Tamworth Country Music Festival in late January; the second biggest country music festival in the world. The city is recognised as the "National Equine Capital of Australia" because of the high number of equine events held in the city and the construction of the world class Australian Equine and Livestock Events Centre, the biggest of its kind in the Southern Hemisphere.

The Kamilaroi people, from whose language comes the word "budgerigar", inhabited the area before European contact. John Oxley passed through the Peel Valley in 1818 and described it as "it would be impossible to find a finer or more luxuriant country than its waters...No place in this world can afford more advantages to the industrious settler than this extensive vale". In 1831, the first sheep stations and cattle stations were formed, and in the same year the Australian Agricultural Company (AAC) was granted a lease of 127,000 hectares (310,000 acres) of land at Goonoo Goonoo, south of the present location of Tamworth, extending to present-day Calala.

In the 1830s, a company town began to develop on the Peel's southwest bank, the present site of West Tamworth. In 1850, a public town was gazetted on the opposite side of the river from the existing settlement. This town became the main town, called "Tamworth" after Tamworth, Staffordshire, represented at the time in parliament by Robert Peel. The town prospered, and was reached by the railway in 1878.

On 9 November 1888, Tamworth became the first location in Australia to have electric street lighting powered by a municipally owned power station, giving the city the title of "First City of Light". The first streetlights used in Australia were commercially owned in Waratah Tasmania in 1886.

Tamworth is located on the western side of the Great Dividing Range, on the banks of the Peel River, about 420 km (260 mi) north of Sydney on the New England Highway, and 280 km (170 mi) inland from Port Macquarie on the Oxley Highway. The town is situated at a narrow point on the Peel River floodplain, nestled at the base of the Wentworth Mounds, a spur of the Moonbi Range, where the Northwest Slopes rise to the Northern Tablelands. The elevation is around 400 m (1,300 ft) AHD. The Peel River runs southeast to northwest through Tamworth. The main town centre is on the northeast bank, between the river and the Wentworth Mounds which rise to heights of 800 m (2,600 ft), towering over the city. The southwest bank is much flatter, and the city's suburbs sprawl to the south. Water for residents and the city's industry is supplied by Chaffey Dam, 44 km (27 mi) south east of the city.

Rainfall is experienced all year round, with summer storms providing occasional heavy downpours. Tamworth's rain season, in the early months of a new year (particularly January) can result in major flooding. Snow is practically non-existent in Tamworth itself, but does rarely occur in the surrounding villages such as Nundle. Frosts are not seldom. On 28 and 29 November 2008, Tamworth, Gunnedah and the surrounding area received torrential rain that caused severe flooding and led to the area being declared a natural disaster area.

The estimated urban population of Tamworth at 30 June 2015 was 42,255, having grown, on average, 1.3 percent year-on-year over the preceding five years. Tamworth had a working population of approximately 18,000 in 2008. At the 2011 census the industry sector in Tamworth with the most employees was School Education with almost 6 percent of the workforce. 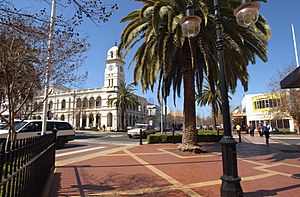 The Tamworth central business district is the city centre and is located north of the Peel River. It is primarily a business area of Tamworth, with many shops, restaurants, car dealerships, as well as shopping centres and public facilities. The Tamworth Regional Council has its headquarters in Peel Street at Ray Walsh House. Bicentennial Park and number one cricket oval are also located in the suburb.

The Tamworth Capitol Theatre is fitted with a 405-seat auditorium with two levels of tiered seating, professional theatre lighting, a full sound system, dressing rooms, an orchestra pit, and fly tower, and is fully air conditioned. It is a multifunctional space for live theatre and cinema productions. It has significantly added to the existing cultural facilities in the region and provides a forum for live theatre, including dance, drama, music, educational activities, conferences and community events. During the Country Music Festival The Capitol Theatre is host to three independent shows per day.

The Tamworth Town Hall, located in the Tamworth Central Business District, is a historical building used for events, conferences and concerts. Additionally, it is commonly used for career expos, antique shows, meetings and conventions. It was built in 1934, has a proscenium stage, a gallery and a seating capacity of 1074 people.

Tamworth Regional Entertainment Centre is located in the suburb of Hillvue. It is a multipurpose centre with a seating capacity of 5,100, and is the biggest of its kind outside the New South Wales and south-east Queensland metropolitan areas.

Sport is a very important part of Tamworth culture, and over 50 different sports and recreational pursuits are participated in by the community. Many major annual and one-off sporting events are held in the city because of the wide range of facilities and venues available. There are over 180 sporting clubs in the Tamworth region and the region has several strong competitions, including basketball, cricket, football (soccer), hockey, netball, rugby league, rugby union and Aussie rules football. As a result, the city has produced many sportspeople, including test cricketers, olympic shooters and hockey players, and many players in the National Rugby League. The Northern Inland Academy of Sport is one important institution in the city that has helped talented sportspeople to establish themselves "on and off the field". It was established in 1992 and has a wide range of community support.

During the Queen's Birthday long weekend in June, Tamworth hosts a Baseball tournament with teams competing from all over NSW and QLD. 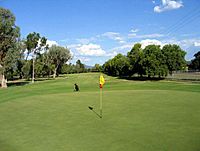 Many different categories in the Speech and Drama section, such as mimes, poetry,story telling and prose reading are held each year for students of all ages to compete. 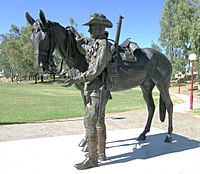 The many important parks in the city of Tamworth include Anzac Park, Bicentennial Park and The Tamworth Regional Botanic Gardens. The botanical gardens were established in 1995 and are run by the Tamworth Regional Council. Bicentennial Park is characterisd by its stagnant waters and high population of wild ducks. The gardens cover an area of 28 ha (69 acres), 5 ha (12 acres) of which has been developed. The gardens conserve the flora of the region, as well as include flora and plant displays from various parts of Australia and the world.

The following buildings in Tamworth are listed on the Register of the National Estate:

Tamworth was the first town in Australia to light its streets by municipally generated electricity in 1888. A larger power station was established in 1923 at a site in Marius Street, East Tamworth due to the high demand of electricity and the main building was demolished in 1982. The Tamworth Power Station Museum's purpose is to tell the story of the city's role in the development of electric street lighting, from the early days of oil lamps in 1876 and gas lamps in 1882, through to the installation of the first electric lights in November 1888. The museum has one of Australia's largest collections of early 20th century electrical appliances.

The Powerhouse Motorcycle Museum holds more than 50 motorcycles spanning from the 1950s to the 1980s. The museum specialises in Ducati, Triumph, Honda, Velocette and Laverda. The museum holds an example of the limited edition MV Agusta F4 Serie Oro. 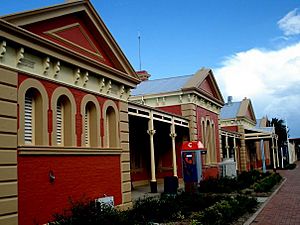 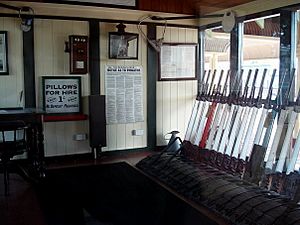 Tamworth station is situated on the Main North railway line. Trains no longer continue all the way to the Queensland border, but the town is still served by the NSW TrainLink Xplorer service between Sydney and Armidale. Until November 2009, Pacific National operated a regular fuel service from Sydney, carrying 30 million litres (6,600,000 imp gal; 7,900,000 US gal) of fuel a year to Tamworth and Dubbo. It was the last freight service to serve the city; in the 1980s, up to six trains a day ran.

Tamworth is served by a daily Greyhound Australia service from Brisbane to Sydney.

Tamworth has the following sister cities:

Politics, public service and the law

All content from Kiddle encyclopedia articles (including the article images and facts) can be freely used under Attribution-ShareAlike license, unless stated otherwise. Cite this article:
Tamworth, New South Wales Facts for Kids. Kiddle Encyclopedia.