Tamworth() is a large market town in Staffordshire, England, 14 miles (23 km) northeast of Birmingham and 103 miles (166 km) northwest of London. Bordering Warwickshire to the South and East, and Lichfield to the North and West, Tamworth takes its name from the River Tame, which flows through it. At the 2011 census, the town had a population of 76,900, making it the second largest settlement in Staffordshire after Stoke-on-Trent.

Tamworth is the home of the historic Tamworth Castle and Moat House and was the capital of the Anglo-Saxon Kingdom of Mercia.

The town's main industries include logistics, engineering, clothing, brick, tile and paper manufacture. Until 2001 it was also home to the Reliant car company, which produced the three-wheeled Robin and the Scimitar sports car. The Snowdome, the UK's first full-sized real-snow indoor ski slope is in Tamworth, and only a short distance away is Drayton Manor Theme Park.

When the Romans arrived in Britain, (43–409 CE) the Trent Valley was home to the British Coritani tribe. Evidence of Roman activity in the area of Tamworth consists of fragments of Roman building materials found near Bolebridge Street. Tamworth was situated near the Roman road, Watling Street and a few miles from the Roman town of Letocetum.

Following the end of Roman rule, the area around the Tame valley was occupied by Anglo-Saxons from northern Germany and Jutland. Stephen Pollington states that the settlers that reached Tamworth were Angles, who left their homelands after rising sea-levels flooded much of the land. Britain offered an attractive option as its landscape was similar to their homelands, but was more fertile and had a more moderate climate. The Angles arrived from the north, navigating inland via the River Humber, River Trent and the River Tame.

The settlers established themselves in "an open meadow by the Tame" which they called "Tomworðig". Nearby they established an "enclosed estate" called "Tomtun" – Tame-town – fortified with a palisade wall. These people called themselves the "Tomsaete": Tame-settlers. Tomtun was initially "not much more than a fortified manor". The settlement straddled the River Anker and contained a "large hall for public gatherings" as well as individual homes and agricultural buildings such as stables and granaries. The Lords of Tame-Settlers quickly became wealthy and Tamworth was thus able to be fortified further.

The Tomsaete were a military tribe, however, when soldiers "reached the age of majority" they retired from military duty and were then allotted parcels of land to farm, manage and defend. Fertile lands surrounding the rivers allotted first, then the hill lands; this land spreading further and further, spreading the power and influence of the tribes. The Tomsaete were one of countless tribes "all vying for power and influence", however the Lords of the Tomsaete came to control and to "dominate" the area known as English Midlands. The tribes initially ruled through unions and alliances of leading families and there is evidence of contact with families across England and also back in the Anglo-Saxon homelands. However, this "warlord" form of government developed and the Tomsaete's lands became a Kingdom with a single leader.

The Tomsaete lived in the heartland of Mercia, and Tamworth was the "royal centre" under King Penda. The King was not static and would not have a single residence; instead he traveled round his territories "to be seen by his people, to give legal judgments, to reward loyalty and to try offenders". Tamworth however, was home to the King's household and children.

In the reign of King Offa it was the capital of Mercia the largest of the kingdoms in what is now England (see Heptarchy). It was by far the largest town in the English Midlands when today's much larger city of Birmingham was still in its infancy. This is largely due to its strategic position at the meeting point of the rivers Tame and Anker, placing the town perfectly as a centre of trade and industry.

The town was sacked by the Danes (Vikings) in 874. It remained a ruin until 913, when Æthelflæd, daughter of King Alfred the Great and Lady of the Mercians, rebuilt the town and constructed a burh to defend it against further Danish invaders. She made Tamworth her principal residence and died there in 918. In Tamworth church in 926, a sister of King Æthelstan, perhaps Saint Edith of Polesworth, was married to Sitric Cáech, the squint-eyed Norse King of York and Dublin. 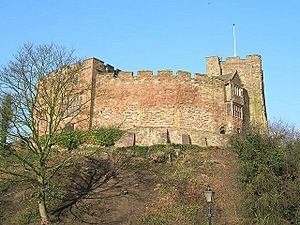 In the 11th century, a Norman castle was built on the probable site of the Saxon fort consolidated Tamworth's historic importance as 'the seat of Saxon kings'.

In the Middle Ages Tamworth was a small market town. However the king gave it charters in 1319. In the Middle Ages fairs were like markets but they were held only once a year and they attracted buyers and sellers from great distances.

In 1345 Tamworth suffered a disastrous fire, and much of the town burned. However, the town was soon rebuilt and grew in size.

James I, the first Stuart king of England, visited Tamworth in 1619

Tamworth castle was besieged by parliamentarian forces during the English Civil War in 1643. An order was issued for the castle to be destroyed but this was not carried out.

Tamworth continued to grow and remained one of the most populous towns in the Midlands by 1670, when the combined hearth tax returns from Warwickshire and Staffordshire list a total of some 320 households. Its strategic trade advantage lay with control of the two vital packhorse bridges across the Anker and the Tame on the route from London to Chester. While it remained a local market town, it did a brisk trade providing travellers with the staple bread, ale and accommodation, maintaining trading links as far afield as Bristol. Charles II's reconfirmation of its borough's privileges in 1663 gave the town an added boost, as confirmed by Richard Blome's description of its celebrated market, well served with corn, provisions and lean cattle.

In 1678 the town's future Member of Parliament Thomas Guy founded almshouses in Tamworth, rebuilt in 1913. He also built Tamworth Town Hall in 1701 and later founded Guy's Hospital in London.

There are four cannon in the Castle Grounds, an indication of the town's previously violent past.

There were a number of improvements to Tamworth during the 19th century. In 1807 the pavements were flagged. From 1835 Tamworth had gaslight. In the late 19th century a piped water supply was created.

The town grew rapidly in the 18th and 19th centuries during the Industrial Revolution, benefiting from the surrounding coal mines. It also became connected to the canal network, with the Coventry Canal being built through the town. Later, the railways arrived with the Midland Railway route from Derby to Birmingham arriving in Tamworth in 1847, and later the London and North Western Railway, which provided direct trains to the capital. A split-level station exists where the two main lines cross each another, the higher level platforms (on the Derby to Birmingham line), being at right angles to the lower ones on the main line to London.

The first municipal cemetery opened in 1876. The Assembly Rooms were built in 1889. In 1897 the corporation bought Tamworth Castle.

The Victorian Prime Minister Sir Robert Peel served as the town's Member of Parliament from 1830 until his death in 1850. He lived at the nearby Drayton Manor. It was in Tamworth that Robert Peel unveiled his Tamworth Manifesto in 1834 which created what is now the modern Conservative Party. While Home Secretary, Peel helped create the modern concept of the police force, leading to officers being known as "bobbies" (in England) and "Peelers" (in Northern Ireland). During the 19th century a breed of pig called Tamworth Pig was initially bred here using some imported Irish stock. Sir Robert Peel was a member of the historic Tamworth Castle Bowls club, founded in 1814, which still has an active membership.

Samuel Parkes who won the Victoria Cross in the Charge of the Light Brigade was born in Wigginton and baptised at St. Editha's on 24 December 1815. His parents, Thomas and Lydia, are buried in its churchyard.

The first public library in Tamworth was built in 1905. Tamworth gained an electricity supply in 1924. 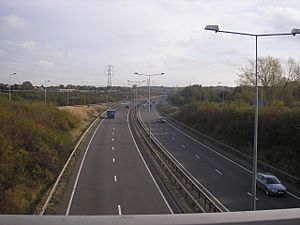 The A5 (Thomas Guy Way) passing through Tamworth, looking south from Glascote.

Tamworth grew rapidly in the postwar years as it soaked up overspill from the West Midlands conurbation to the southwest. A population of about 7,000 in 1931 had risen to some 13,000 just after the Second World War; this figure remained fairly static until the late 1960s when a major expansion plan was implemented. Although not officially a "New Town", Tamworth's expansion resembled the development of many new towns. As part of this plan the town boundaries were expanded to include the industrial area around Wilnecote to the south. The 1961 population of the new enlarged area was 25,000. In 1971 it was 40,000; in 1981, 64,000; in 1991, 68,000 and in 2001, 72,000, meaning that the town's population had almost doubled within 30 years.

The town of Fazeley merges almost completely into the town to the southwest, but belongs to the Lichfield District area rather than Tamworth Borough. It became a town, after a referendum on a choice to merge with Tamworth.

Tamworth was historically split between Staffordshire and Warwickshire, with the county boundary running through the town centre. Staffordshire was made to include the entire borough in 1888.

The Reliant Motor Company was founded in Tamworth in 1935 by T.L.Williams, and cars such as the Scimitar four wheeled sports cars and the Robin three wheeled economy cars were manufactured here until the company moved to Cannock in 1998. A year later the old factory was razed to the ground and a new housing estate built in its place called "Scimitar Park" with street names assuming names of Reliant vehicles (i.e. Robin Close).

The A5 dual-carriageway Fazeley, Two Gates and Wilnecote Bypass opened in July 1995, acting both as a bypass of Watling Street, and as a fast route for traffic into the town. This was further extended to meet the M6 Toll and A38 in 2005. The road's official name is Thomas Guy Way.

Tamworth is divided into Wards, locations listed below:

Sir Ernest William Titterton was born in Tamworth. He was a research officer for the British Admiralty during World War II before becoming in 1943 a member of the British mission to the U.S. to participate in the Manhattan Project which developed the atomic bomb. He was knighted in 1970.

Former The Teardrop Explodes frontman and solo artist/writer Julian Cope was raised in Tamworth and later lived in nearby Drayton Bassett. Cope recorded three solo albums during his Tamworth years, World Shut Your Mouth (1984), Fried (1984) and Saint Julian (1987), and all three used various locations around Tamworth for their sleeve art and several videos. The heavy rock band Wolfsbane cut their teeth in the town, before their lead singer Blaze Bayley went on to front the legendary Iron Maiden. Rock guitarist Clem Clempson was born in Tamworth. Bob Catley the lead singer of rock band Magnum (band) also lives in Tamworth. Guitarist/vocalist/songwriter/producer Phil Bates (Trickster, ELO Pt2, Quill and solo artist) was born in Tamworth, and played in local bands the Teenbeats and Source of Power until moving away from the area in 1971. Phil still has strong family and musical connections with Tamworth. Tamworth has an active music scene, which circulates to some degree around The Skull Club and Tamworth Bands (also known as 'Tambands') websites.

The main road running through Tamworth is the A5. The M42 motorway runs to the east of Tamworth and the town is served by junction 10 which also contains Tamworth services. 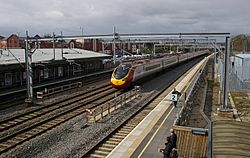 The nearest airports to Tamworth are Birmingham Airport and East Midlands Airport.

All content from Kiddle encyclopedia articles (including the article images and facts) can be freely used under Attribution-ShareAlike license, unless stated otherwise. Cite this article:
Tamworth, Staffordshire Facts for Kids. Kiddle Encyclopedia.