The mascot of the band is Eddie, a monster, who is present in the concerts and also appears on the album covers. Eddie is most often shown as a dead body that has come back to life and looks very evil. The band's music shows often have a statue of Eddie that is very large and much taller than the band. 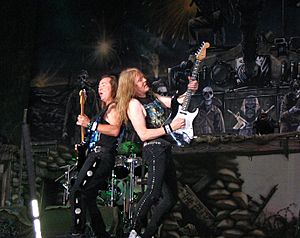 All content from Kiddle encyclopedia articles (including the article images and facts) can be freely used under Attribution-ShareAlike license, unless stated otherwise. Cite this article:
Iron Maiden Facts for Kids. Kiddle Encyclopedia.