The O2 Arena facts for kids

Kids Encyclopedia Facts
This page is about the indoor arena located in London. For other uses, see O2 Arena.

The O2 Arena is a multi-purpose indoor arena in the centre of The O2 entertainment complex on the Greenwich Peninsula in southeast London. It opened in its present form in 2007. It has the second-highest seating capacity of any indoor venue in the United Kingdom, behind the Manchester Arena, and in 2008 was the world's busiest music arena.

The arena was built under the former Millennium Dome, a large dome-shaped building built to house an exhibition celebrating the turn of the third millennium; as the structure still stands over the arena, The Dome remains a name in common usage for the venue. The arena, as well as the overall O2 complex, is named after its primary sponsor, the telecommunications company O2, a subsidiary of Spain's Telefónica. 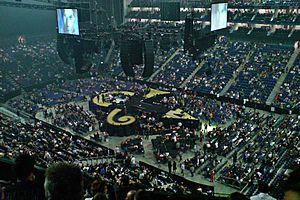 Prince’s stage for his sold-out performance of 2007

Following the closure of the Millennium Experience at the end of 2000, the Millennium Dome was leased to Meridian Delta Ltd. in December 2001, for redevelopment as an entertainment complex. This included plans for an indoor arena.

Construction of the arena started in 2003, and finished in 2007. After the interior of the dome had been largely cleared and before building work inside began, in December 2004, the dome was used as the main venue for the annual Crisis Open Christmas organised by the London-based homelessness charity Crisis.

The seating arrangement throughout the whole arena can be modified, similar to the Manchester Arena. The ground surface can also be changed between ice rink, basketball court, exhibition space, conference venue, private hire venue and concert venue.

The arena was architecturally built to reduce echoing, a common problem among London music venues.

Main page: List of events at the O2 Arena

In August 2007, rock star Prince began a series of 21 sold-out nights at the O2 Arena. The record-breaking run featured many of his hits while the set list changed every night so no two shows would be the same.

On 21 July 2007, British rock band Keane played the arena as part of their Under the Iron Sea Tour, and the performance was later released as their Keane Live DVD.

Beginning in July 2009, Michael Jackson was scheduled to hold a 50-show residency at the arena, titled This Is It. However, the concerts were cancelled, as Jackson died on 25 June, eighteen days before the first scheduled show.

From 2008, the O2 Arena has hosted Capital's Jingle Bell Ball which is an annual mini-festival held over two nights, usually in early December. 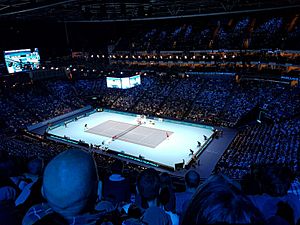 Since 2009, the arena has hosted the ATP World Tour Finals, the season-ending finale of men's professional tennis, featuring the top eight players in the world. The venue has hosted the event for the second-longest tenure, behind only Madison Square Garden (1977–1989).

During the 2012 Summer Olympics and Paralympics, the venue was referred as the North Greenwich Arena due to Olympics regulations regarding corporate sponsorship of event sites.

Ariana Grande was scheduled to perform on 25 and 26 May 2017 as part of her Dangerous Woman Tour, but the event was cancelled after the Manchester Arena bombing on 22 May. The event was not rescheduled. Grande has since then held five concerts at the arena for her Sweetener World Tour on 17, 19, and 20 August 2019 as well as 15 and 16 October 2019.

Since March 2013, the arena has hosted C2C: Country to Country, Europe's largest country music festival, which annually attracts over 20,000 fans. UK and Irish acts, as well as up-and-coming American acts, perform sets several times across various pop-up stages in and around the arena, with the main stage accessible only to ticket-holders. The seventh C2C was held on 8–10 March 2019.

Since 2014, the Australia-based charismatic Christian church Hillsong has held the Hillsong Conference London at the arena.

Despite being open for only 200 days per year (the equivalent of seven months), the venue sold over 1.2 million tickets in 2007, making it the third-most popular venue in the world for concerts and family shows, narrowly behind the Manchester Arena (1.25 million) and Madison Square Garden in New York City (1.23 million).

As of 2020, the O2 Arena was still the busiest music arena in the world in terms of ticket sales.