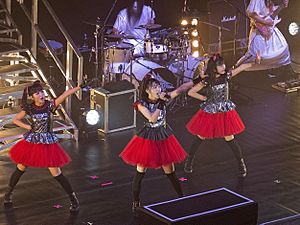 Babymetal is a Japanese metal band. The members are Suzuka Nakamoto, Yui Mizuno and Moa Kikuchi. The band started in 2010. Their first album Babymetal was released on February 26, 2014 in Japan.

All content from Kiddle encyclopedia articles (including the article images and facts) can be freely used under Attribution-ShareAlike license, unless stated otherwise. Cite this article:
Babymetal Facts for Kids. Kiddle Encyclopedia.